The sun in Kaitaia is hidden with low-level clouds today. It is windy but warm. Here have got together windsurfing and paddleboarding (a stand up paddle board with a SUP paddle) lovers, as well as those who love beach running and beach driving.

It is a strip of sand that is actually 88 kilometers long. The fact contradicts the name “Ninety Mile Beach”. There are several theories explaining the fact. The most common theory tells that when missionaries investigated the north part of New Zealand, the beach took three days to travel on horse back when on average a horse could travel 30 miles in a day. But the missionaries did not take into account the slower pace of the horses walking in the sand.

In the 30-s of the last century that part of the coast line was actively used as a runway. The sand there is dense, firm, and compressed by the uniform waves of the Tasman Sea. Ninety Mile Beach is still sometimes used as an alternative road to State Highway 1 when the main road is closed due to landslides or floods.

When the tide flows, almost the whole beach gets under the water. It is prohibited to tent and spend nights on the beach for safety reasons and due to the fact that since the beginning of time maori buried their deadmen in the coastal dunes. Truth be told, many people ignore the prohibition. Often cars left on the beach all night get sunk in a stream and stay there forever. Here and there on the beach you come across frames eroded by salt water.

That is how a car sunk in a stream looks like (from Wikipedia). When we spent a night on the beach (yeah, surely it is wrong to act like that), we left our car in the car park in Kaitaia. 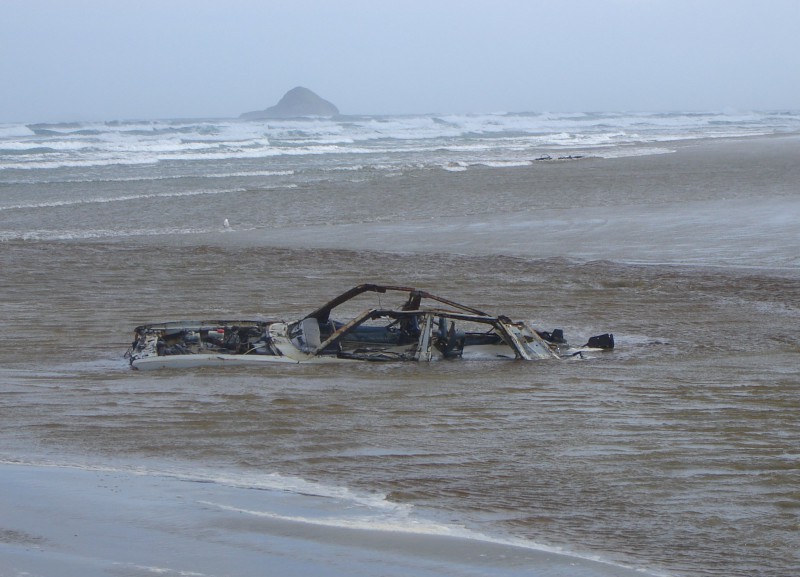 A shark head stranded by the incoming tide. 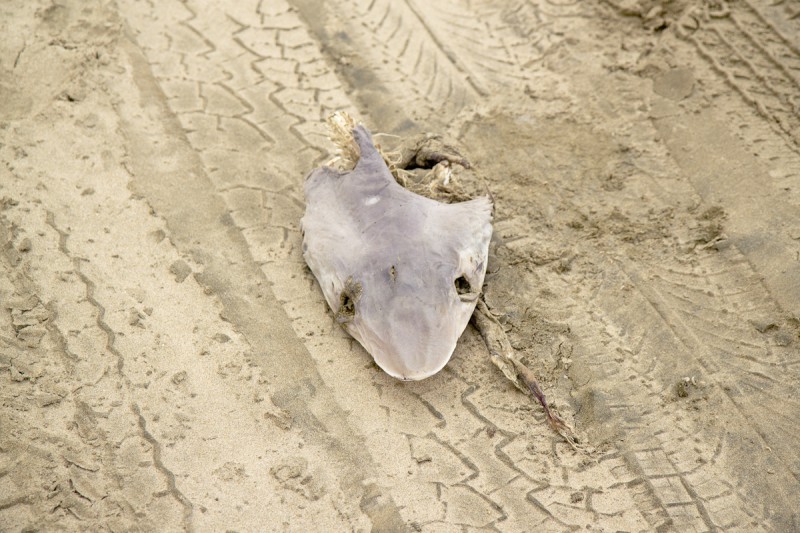 The end of the beach is beyond the horizon. 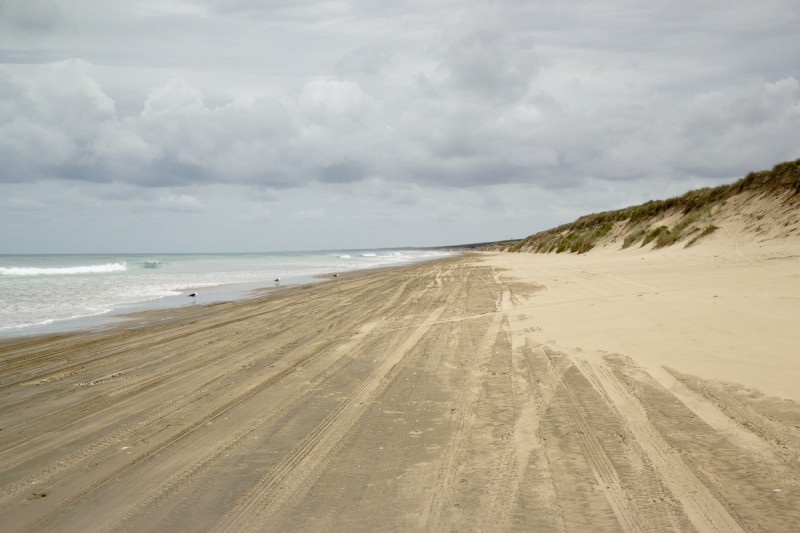 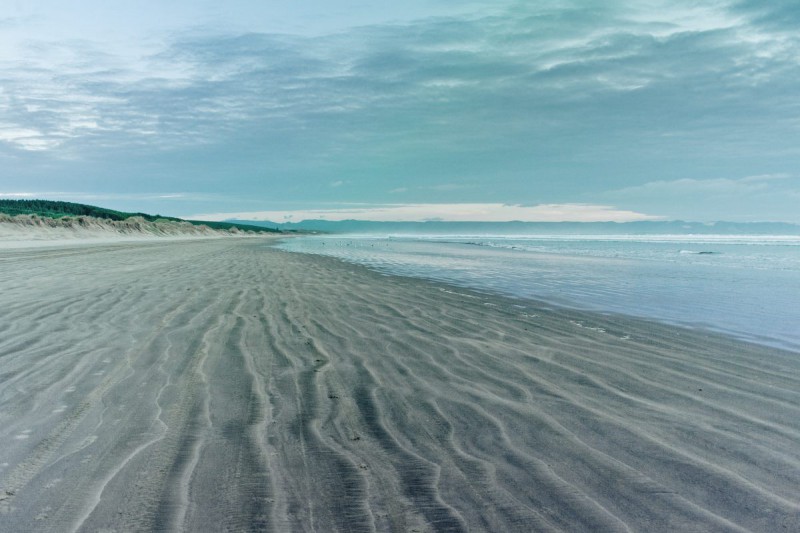 The surface is firm so one can rather easily drive 4WD here. 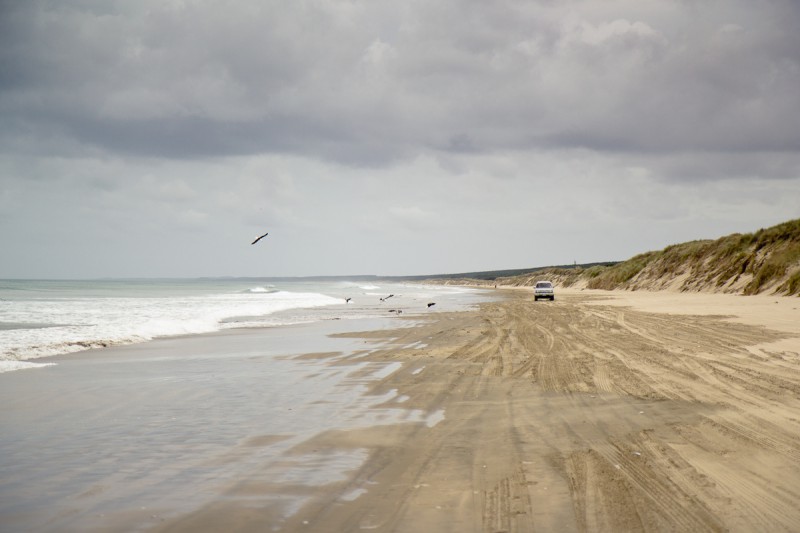 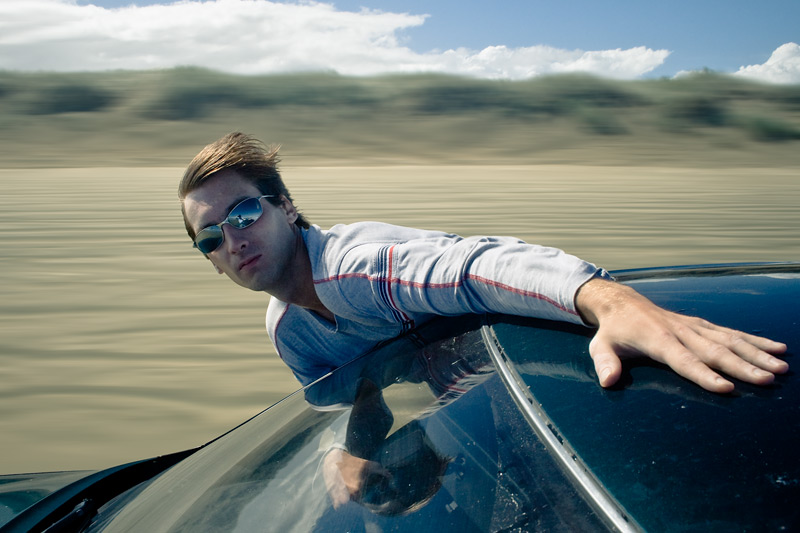 When the tide ebbs, the wet surface of the beach turns into a mirror. 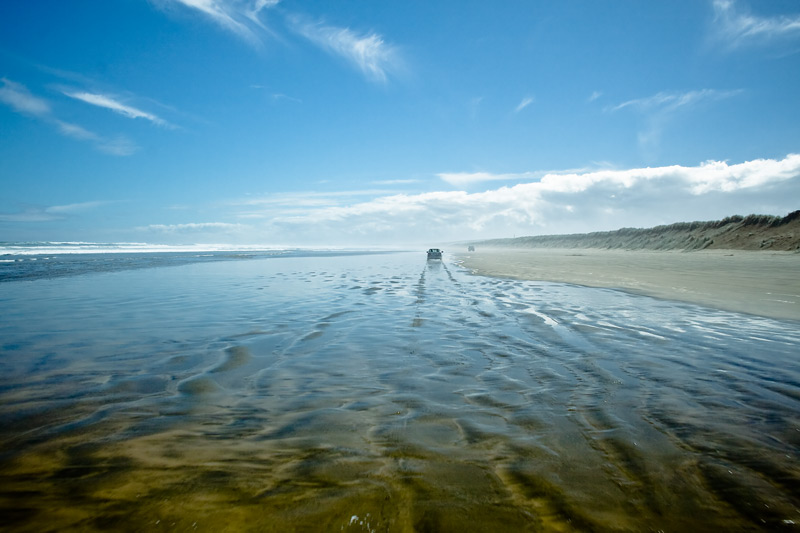 One can drive the sleek sand surface without fear. 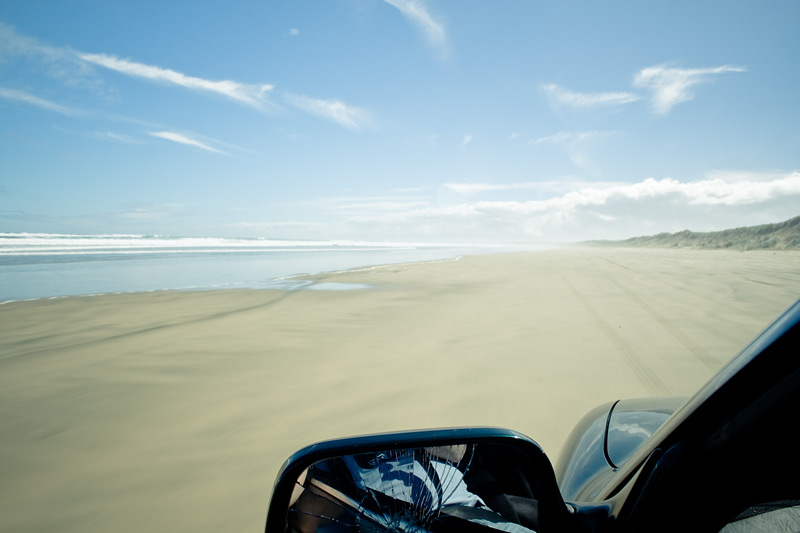 An incredible sense of freedom. 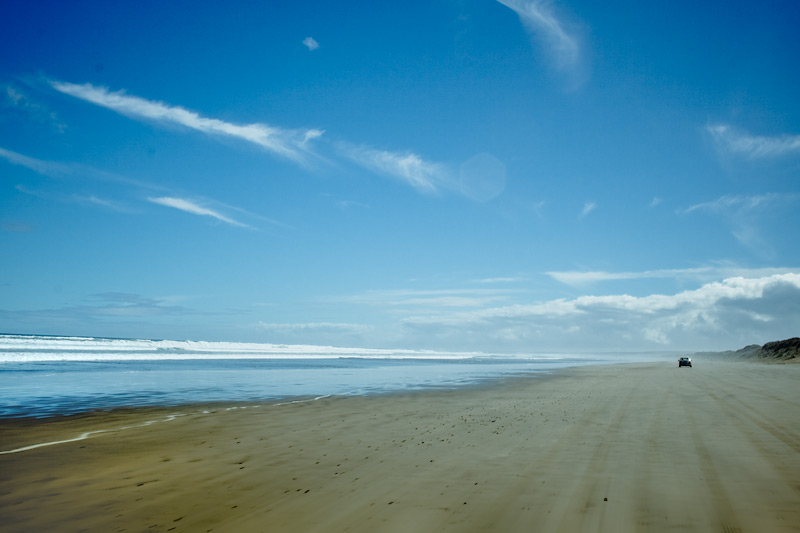 The sky over Ninety Mile Beach. 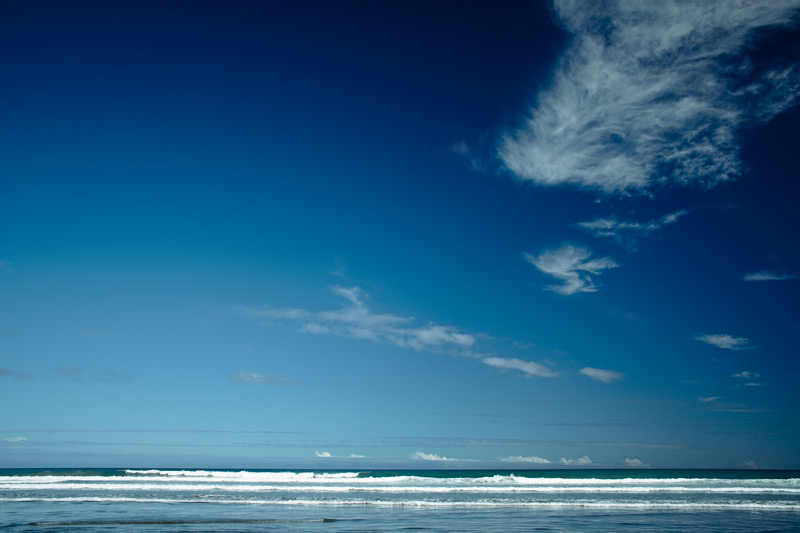 Haven’t you noticed anything special on the surfer’s photo? 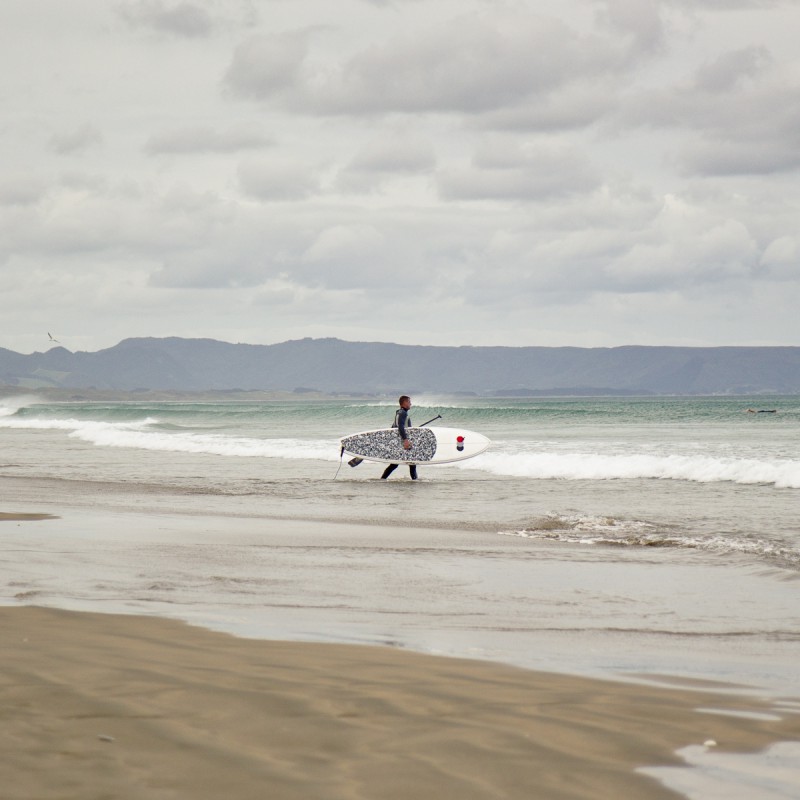 Yes, sure. It is not a surfing board but a paddle board. A paddle helps to cope with the board. 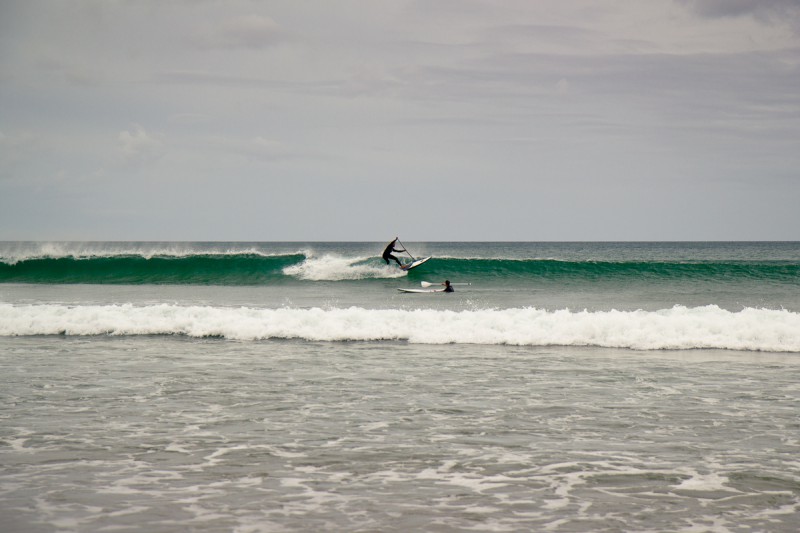 When a paddle boarder catches a wave, he/she holds on to the wave with a paddle. 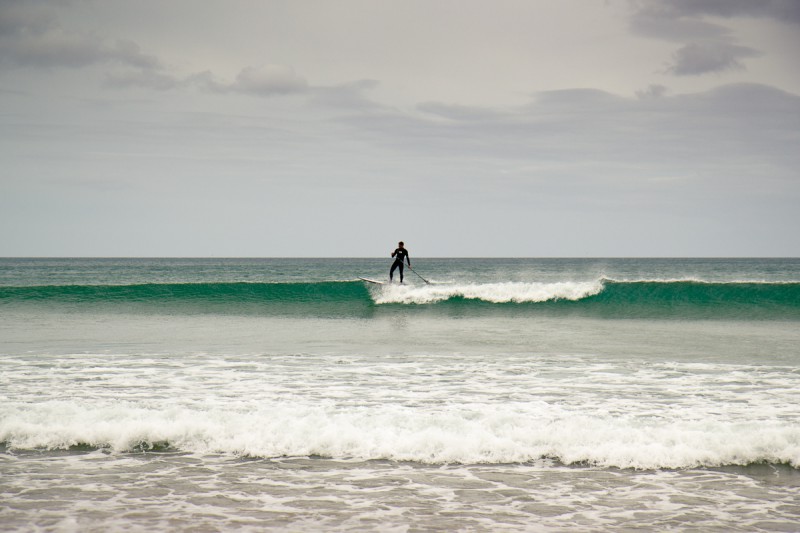 Such a method prolongs the period of sliding and allows the surfer to catch small and irregular waves. 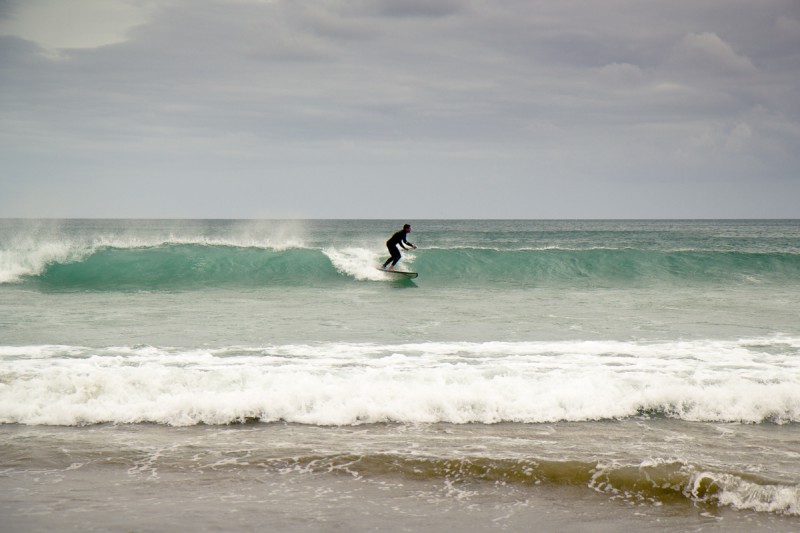 Long coastal walks is a favourite pastime for the people of the coastal town Kaitaia. 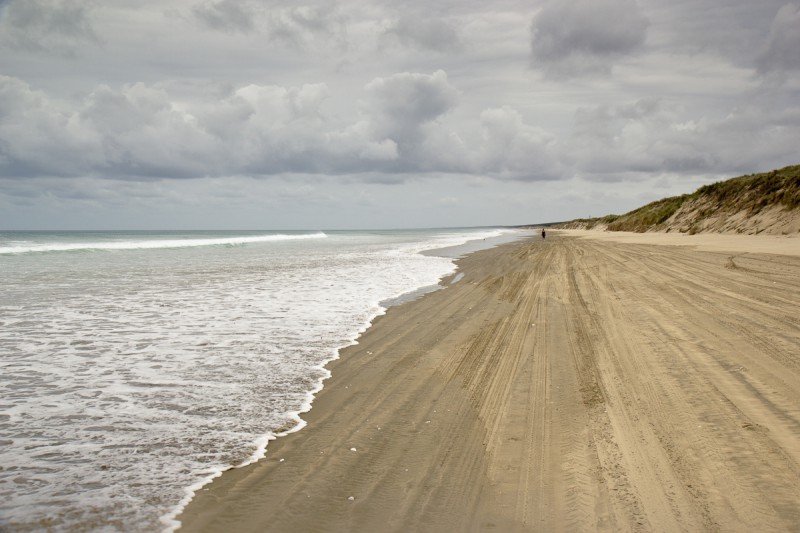 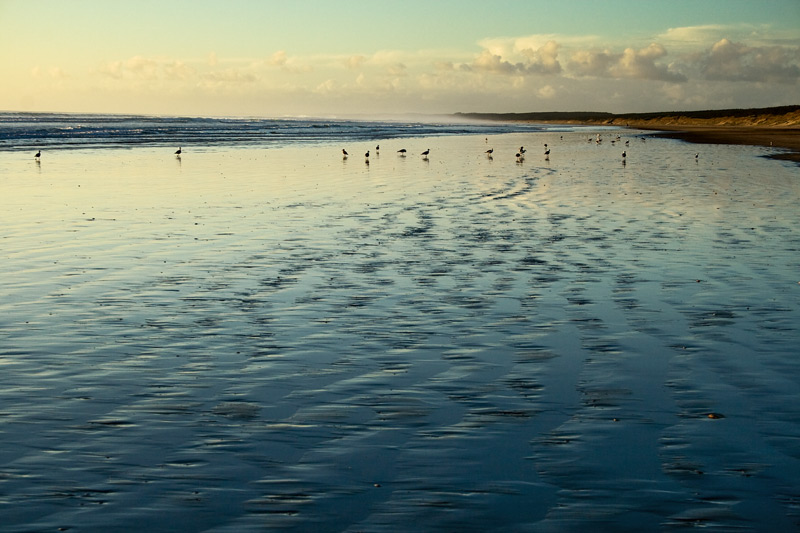 If you want more pictures and more story, here you can watch video taken by Artyom Verbovikov during the trip to the northern part of the North Island.