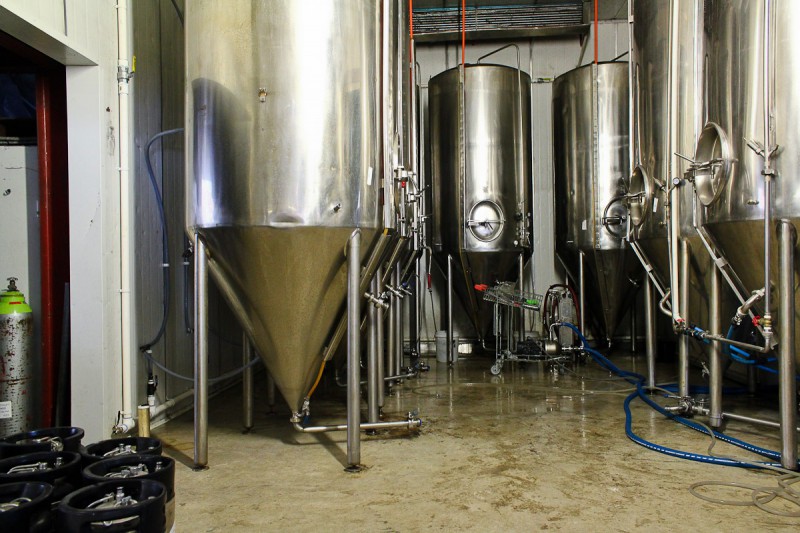 When traveling I always taste the local food, especially local alcoholic beverages. My stomach is far from being satisfied with that habit. When I traveled to China, my stomach was upset for fifty days out of a hundred and twenty spent there. Once I even was in the hospital because of food poisoning, as I was said. But I did not stop tasting new food. People get just one bite at the cherry of human life. In addition, it is really delicious to have steaming piping hot rolls with peanut sauce and fresh home-made Vietnamese beer for breakfast, you know. Or in Katmandu, I remember, there was tonba with momo which is a type of dumpling with the filling made of chopped beef and served with chili sauce.
I have never understood people sitting in a Belgian pub and ordering some green-bottle beer with one and the same artificial poster taste. On Rarotonga which is one of the Cook islands, we used to order a local lager “Cook” or, as some of the menus said, “Captain Cook”. Fresh, tasty and cheap. Sure, one day we decided to see with our own eyes how it was being made and went to a tiny brewery located only one block from the center of Avarua.
The post is continued with a dozen of photos with metal mash-tuns and beer kegs and comments.

Against the background of plastic bottles with glued faces of the famous sailor, there are various sorts of malt and barley in glass jars. The brewery makes two types of light beer and one type of dark beer. The owner generously fills beer mugs for visitors, so it is pleasant to drop in. 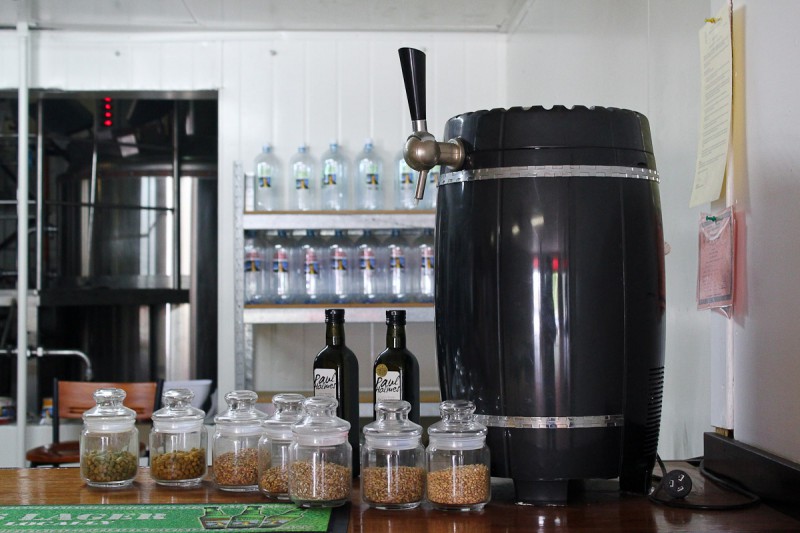 One of the owners of local bars, where tourists daily and nightly wear out the seats of their trousers and “rub” terminals with their Charge Cards, came to get fresh beer. 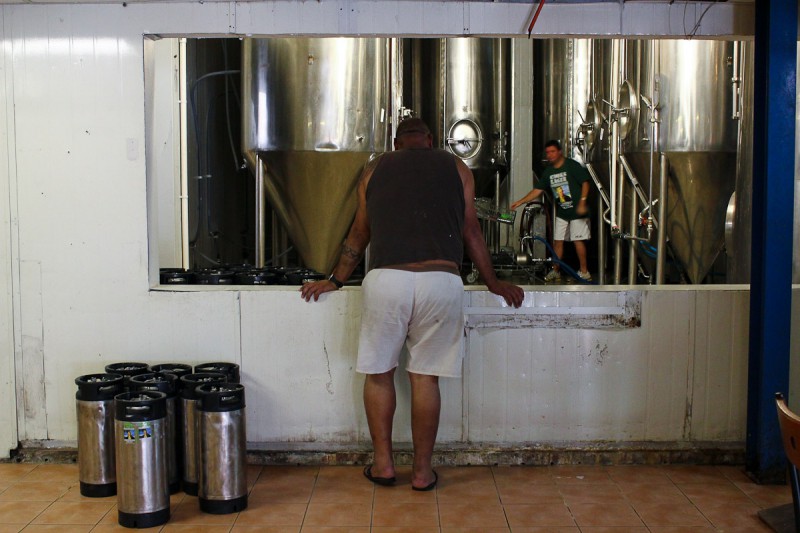 Part of the brewery territory was intended for a beer bar. By the time I was there, the brewery had been working for less than a year. The anniversary celebrations with the island music, ukulele and ololo-singing were to start soon. Women were going to decorate themselves with flowers. 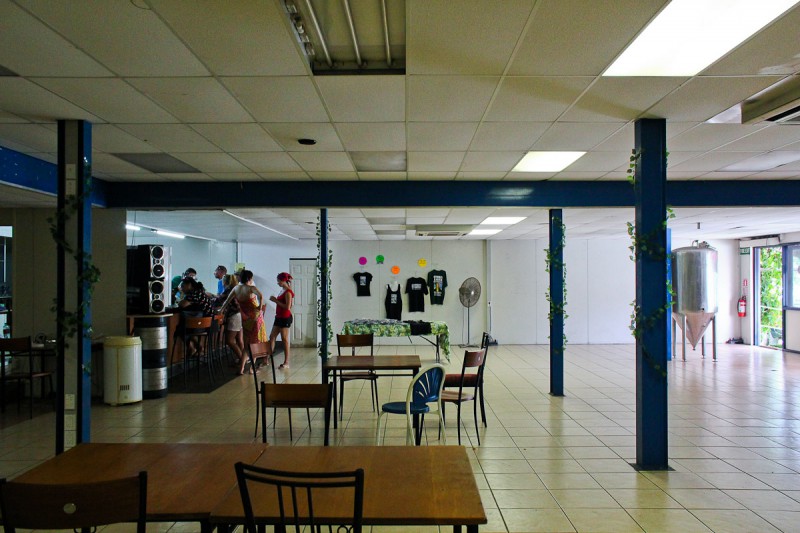 As you see, It is a “village” bar, and everything is very simple. I like it this way.
Alexander, a Russian tourist, is checking the quality of a souvenir T-shirt with the image of Captain Cook. 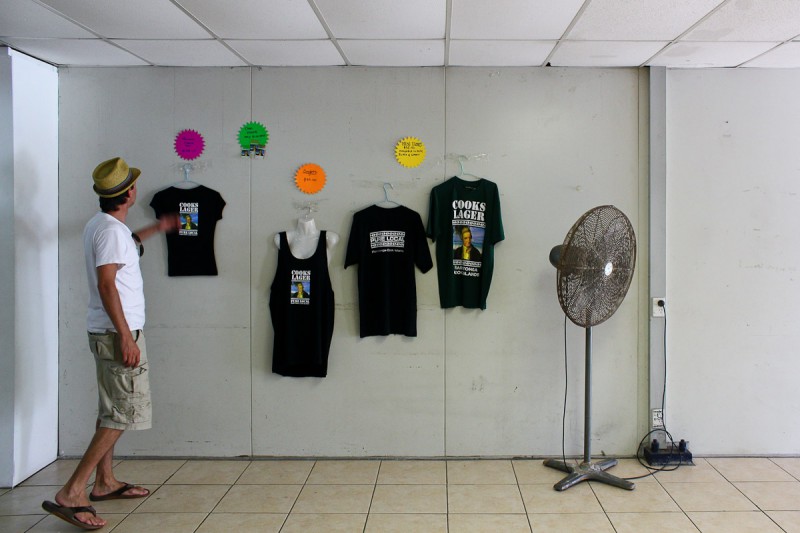 Kegs with the product. If am not mistaken they cost a hundred dollars a keg. People on the Cook islands use the same kind of dollars as in New Zealand. 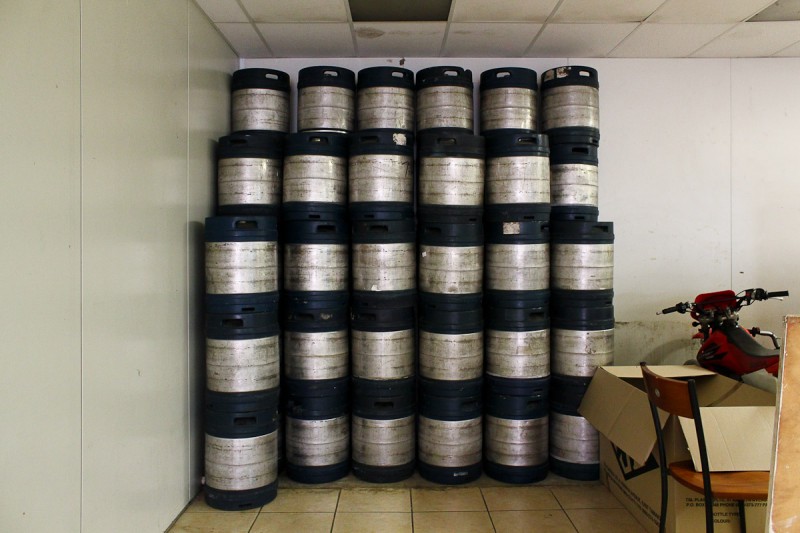 After the owner of the brewery let us have all the variety of the product, he suggested making a little tour. In the picture, you can see a shop where bottles and printed matter were held. As far as I understood, the labels were attached manually. The equipment for the process automation was rather expensive and the owner could not afford it at the time. 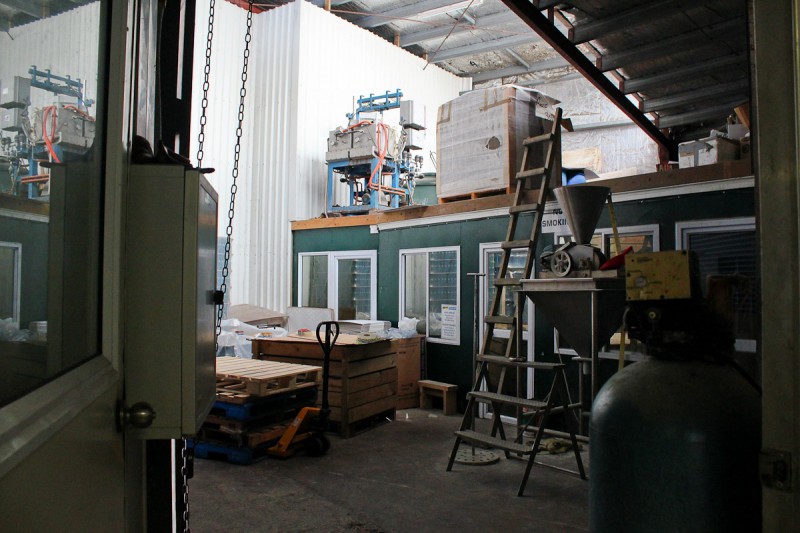 That is a production department of the brewery “Captain Cook”. As you can easily guess, these are the tuns where beer is made. 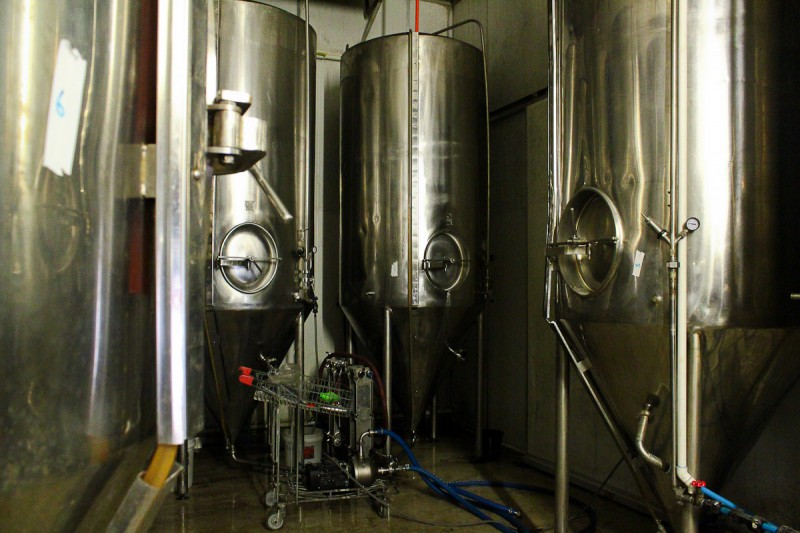 The owner explains the mode of operation, notably the way how that thingamajig crushes corn. 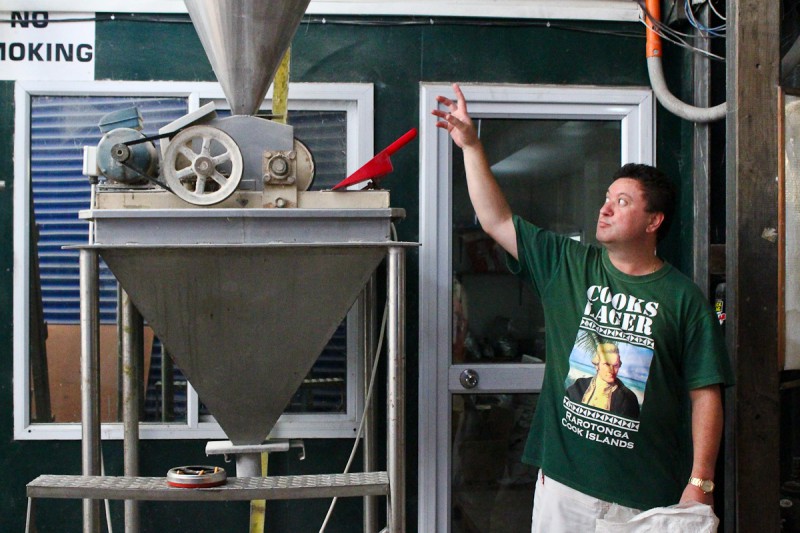 It is necessary to maintain certain temperature and pressure inside the mash tuns. The full cycle of making beer takes 12 days. 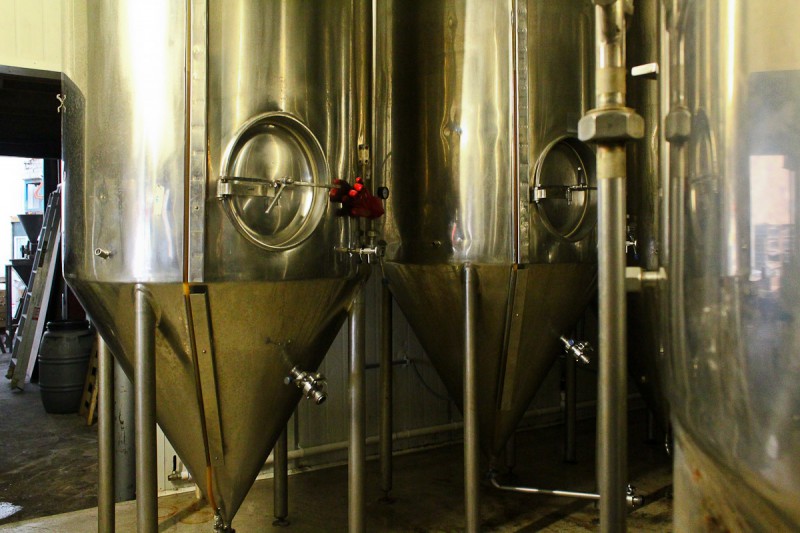 Russian tourists were not embarrassed to ask questions like, “What is this button for?” 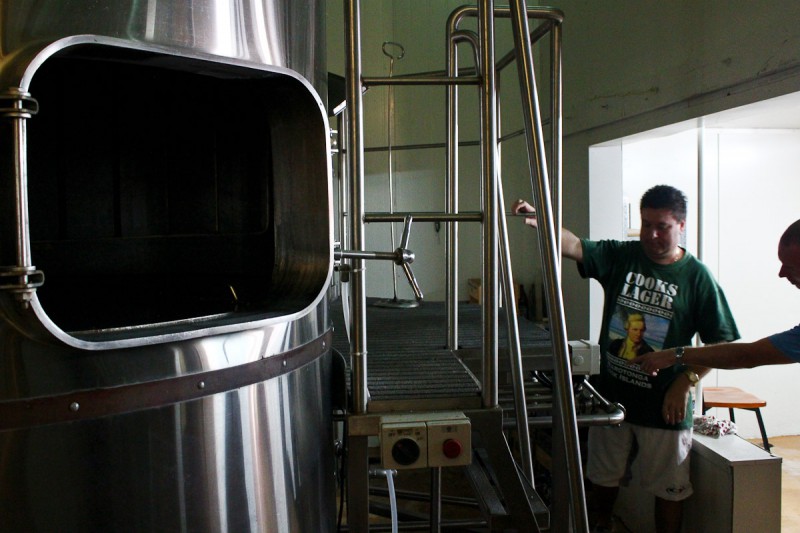 I did not get what that rubber glove hanging on one of the controllers was for? 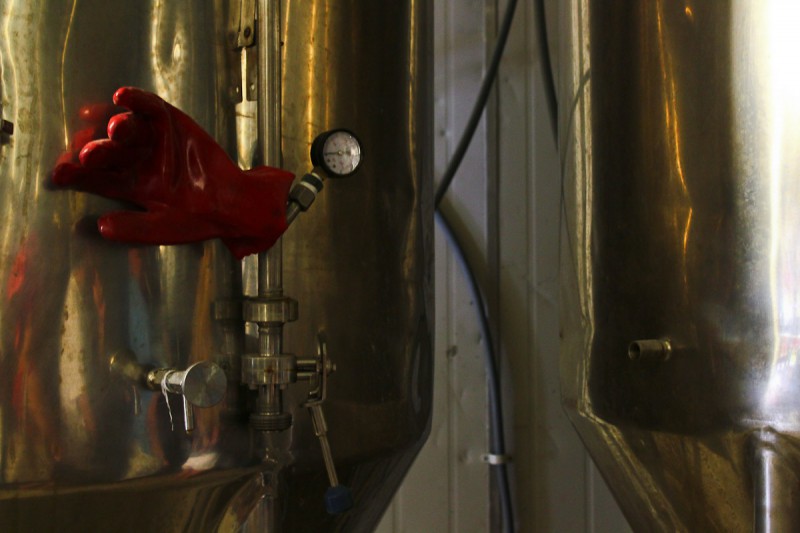 Glass containers for the lager “Cook” is collected in the whole territory of the island. It is not advantageous to deliver them from the mainland. The glassware’s price is tenfold higher than the price of the drink. 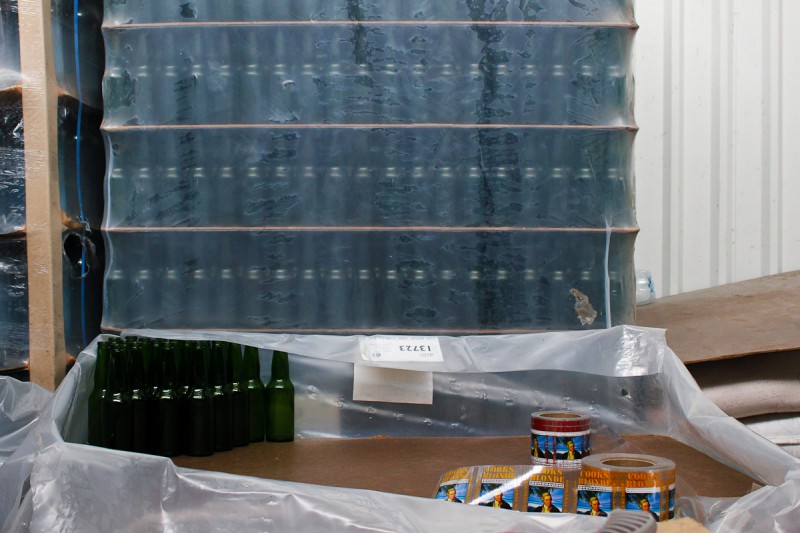 In the end of the tour we were given beer labels and I noticed that Captain Cook in the label had a red nose. I asked if he had it red because of the print or if it had been red in reality? The owner laughed at the joke, poured more beer to us and invited to come again. Of course, we came again, at least once. Light lager with smoked tuna from a fresh catch was just perfect!