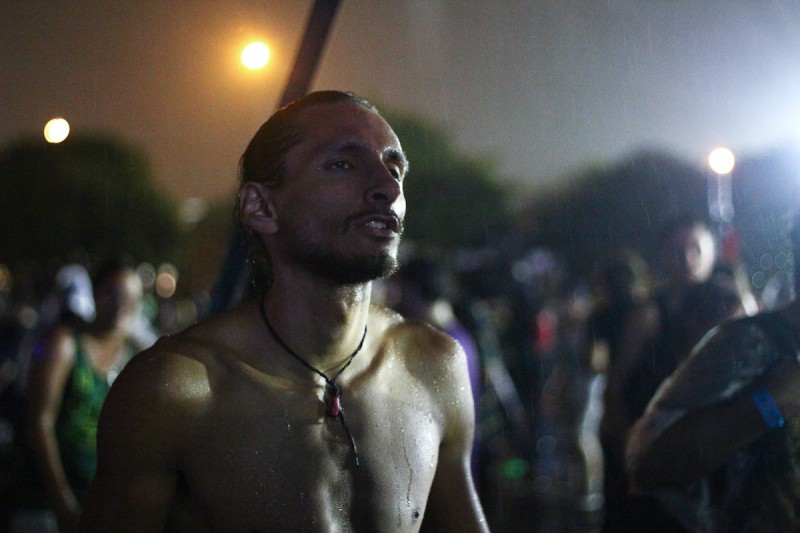 It is the last post with thirty photos from the festival “Big Day Out” which was held in the end of January in 2011. I am not going to tell about the participants and the festival again. I am just going to show the pictures and to comment some of them in an acrid way.

The first post from the festival starts with the photo of that very young man. He was relatively sober then. 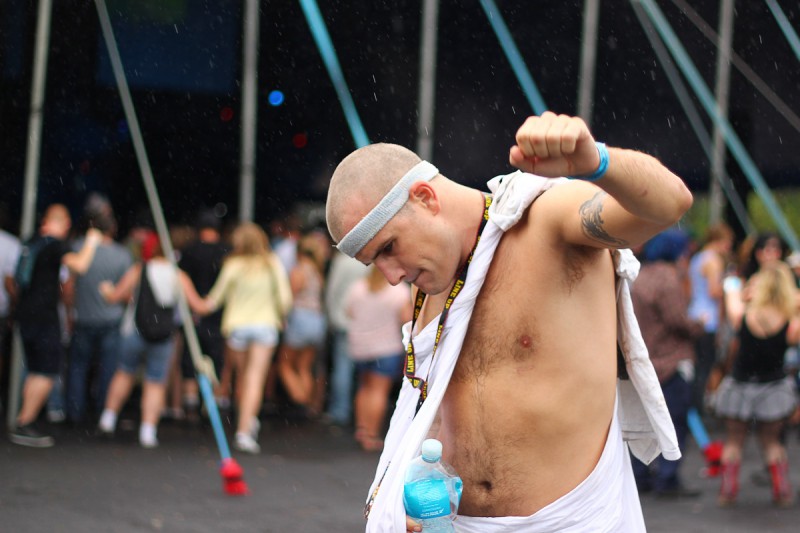 Closer to the evening the rain drove faster. There were sticks “I ♥ CSS” on the breast of the girl in a raincoat, (HTML designers will be pleased to see them.)  The schedule of group performances was dangling around her neck on a red tape. 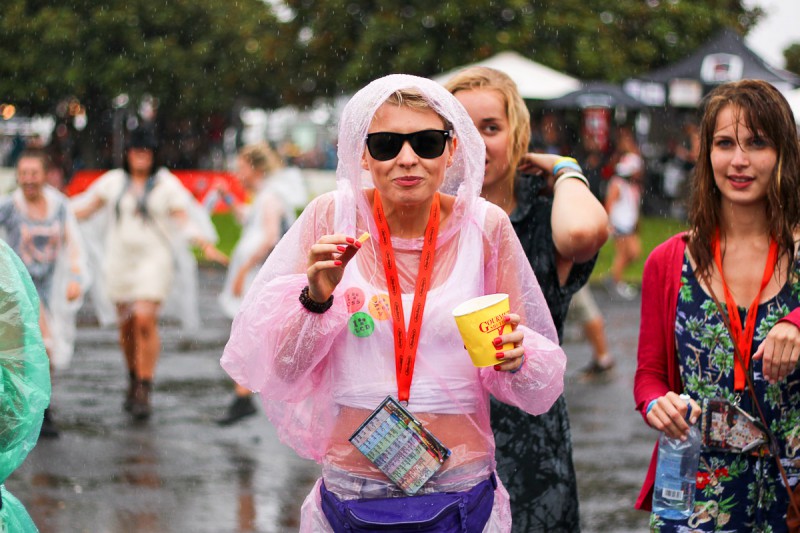 The girls saw that I was out in the rain making photos of passers-by. They came up to me and asked to make their photo. Real kiwi youths in awful footwear but very sociable. I left them a visiting card for they could write me but no one did. 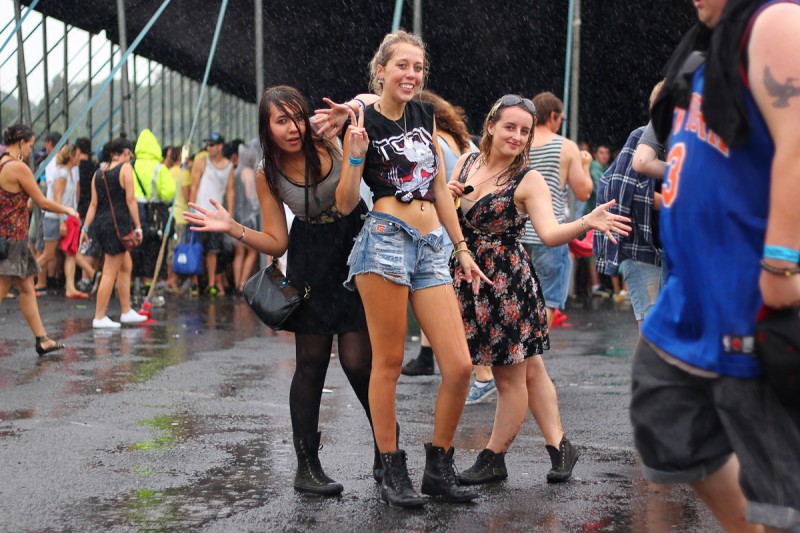 As for kiwi guys, they look like common teenagers – thin and wild. While dancing they shake their heads wildly. The photo was made at the border of the Boiling Room which was an electronic-music marquee. 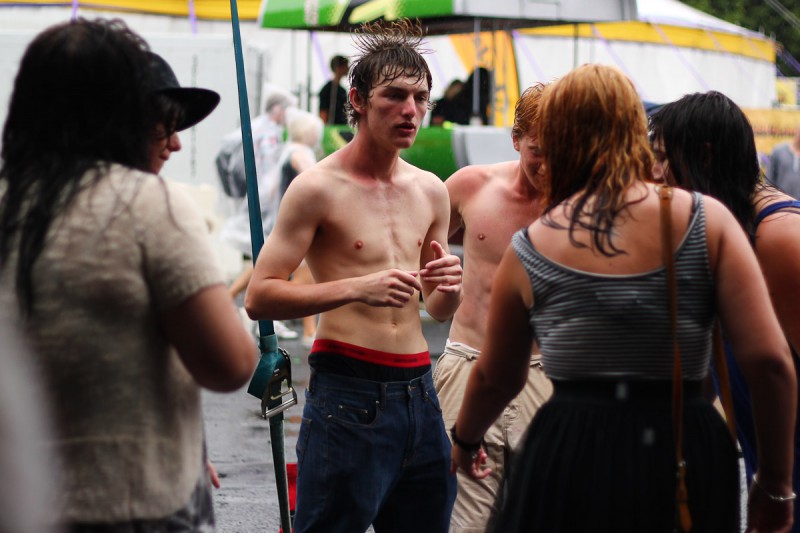 While Auckland people having visited the rock-festival were keeping the rain out and taking shelter under the awning roof, we started to move in the direction of main stages. 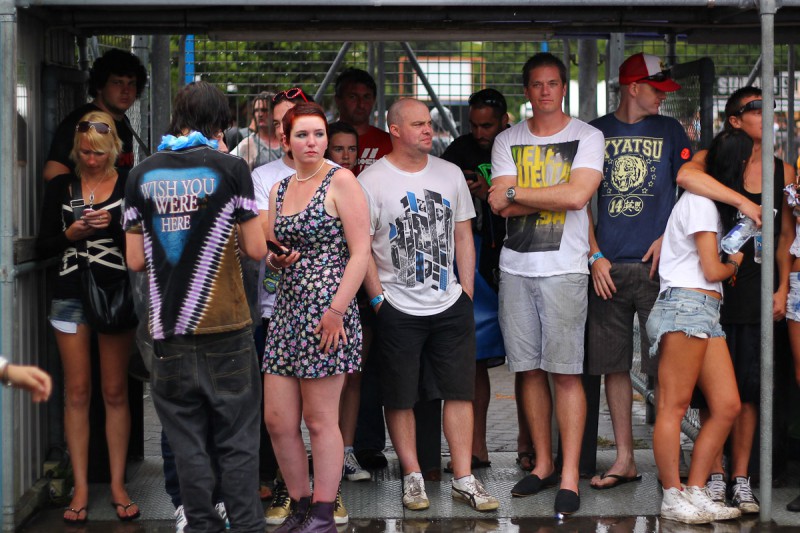 We decided to walk round the field and make ourselves comfortable in the opposite stand to better see the Orange Stage where the Iggy Pop group was just about to start their performance. 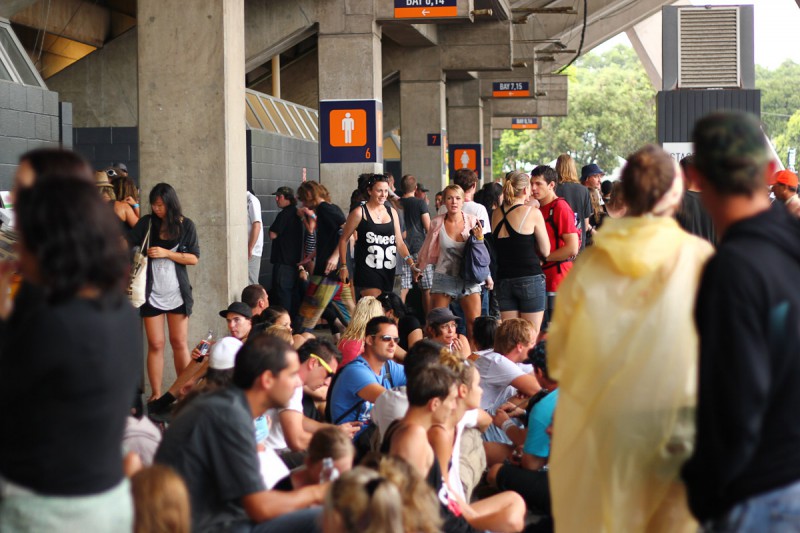 In the remote stands, no one was sitting in the modest “hands on the knees” way. There was one more “alcohol area”, so people were very active  after they had almost “killed” themselves with beer. 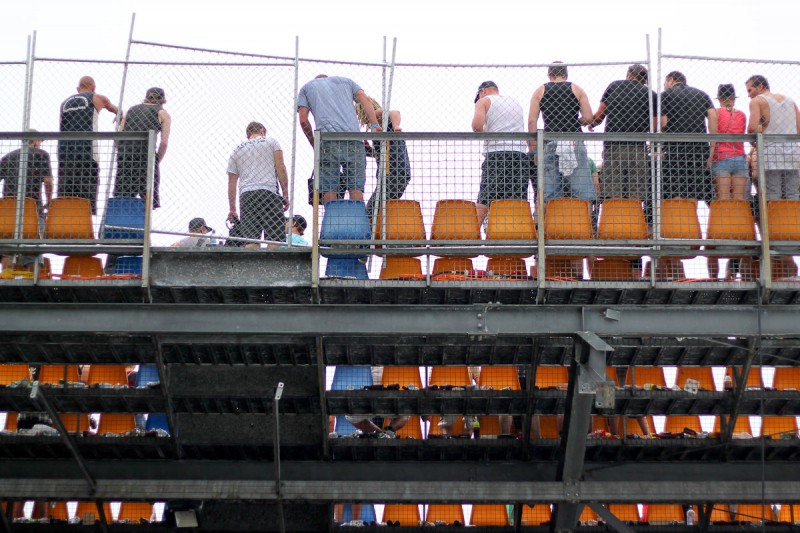 So we had to wander around the field for some time. All seats under the awnings were engaged and the wet spectators were waiting for Iggy. 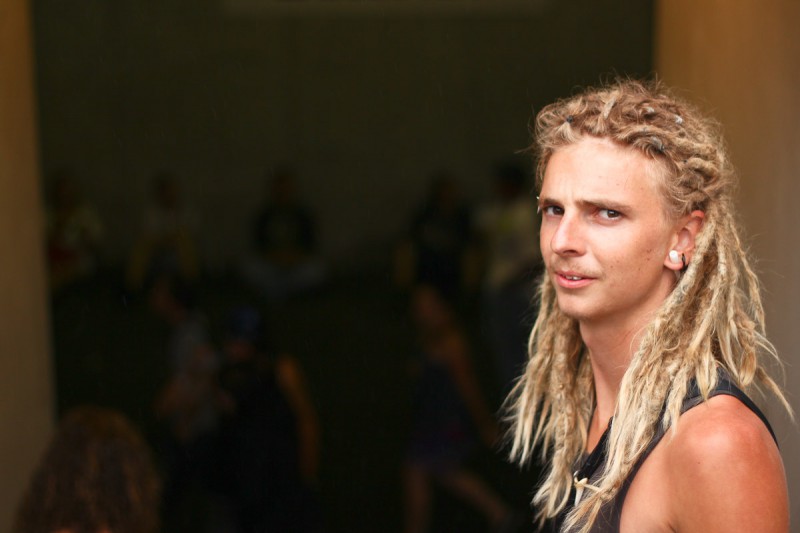 To the great disappointment of all the spectators, the quality of sound left much to be desired. (Perhaps, somebody will comment if I am not right but it seems to me that during the rain the propagation of sounds is bad because they interfere and transform into a porridge-like cacophony.)

Spectators could hardly make out the words of the songs. Iggy looked well and brisk as usual, though. When I was younger I perceived him as tall and thin. It turned out that he was my height. 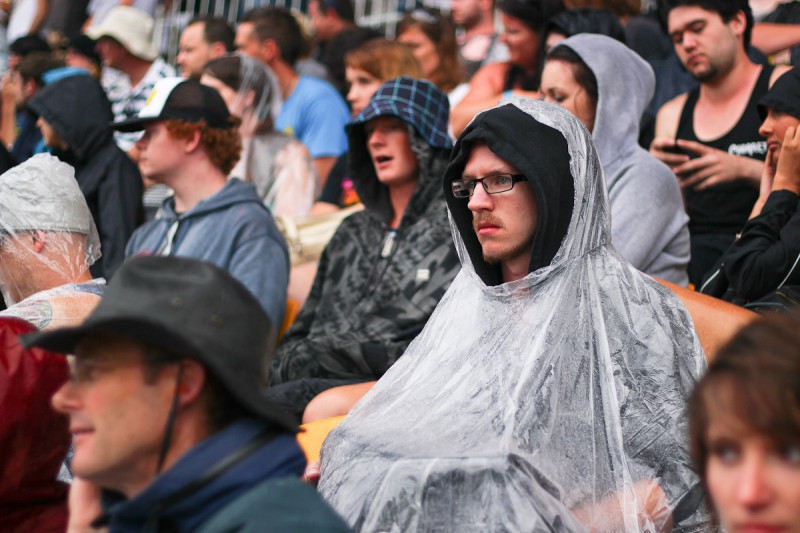 A couple of older guys. It probably was the fifteenth “Big Day Out” for them. 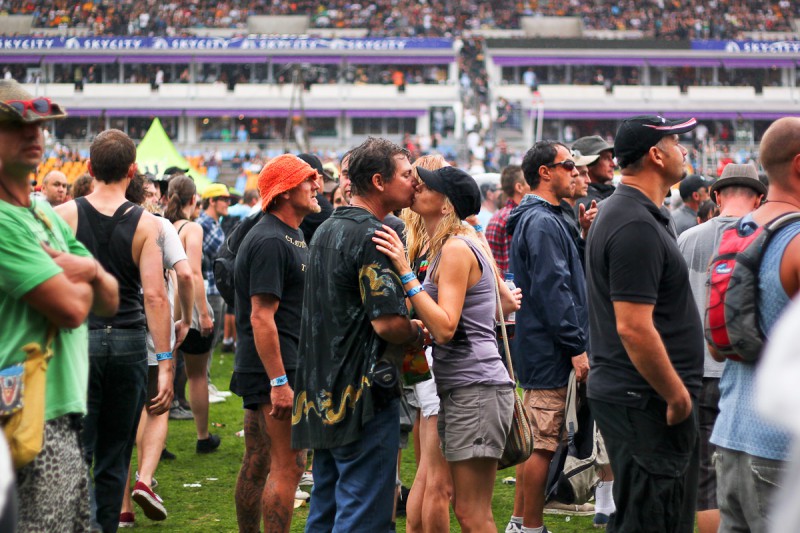 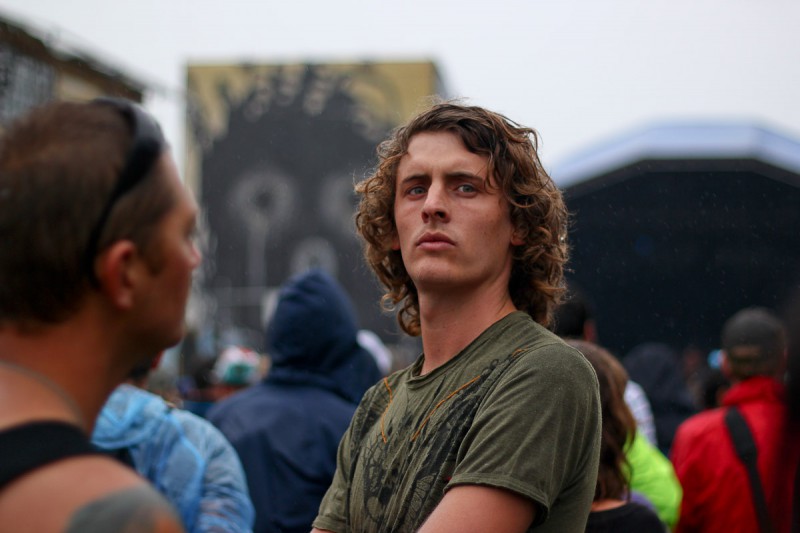 I used to meet that art-boy on my way to work every morning, he resembled one of the characters of the film “Almost Famous”. It looked like he had guessed to make a raincoat out of a refuse sack. 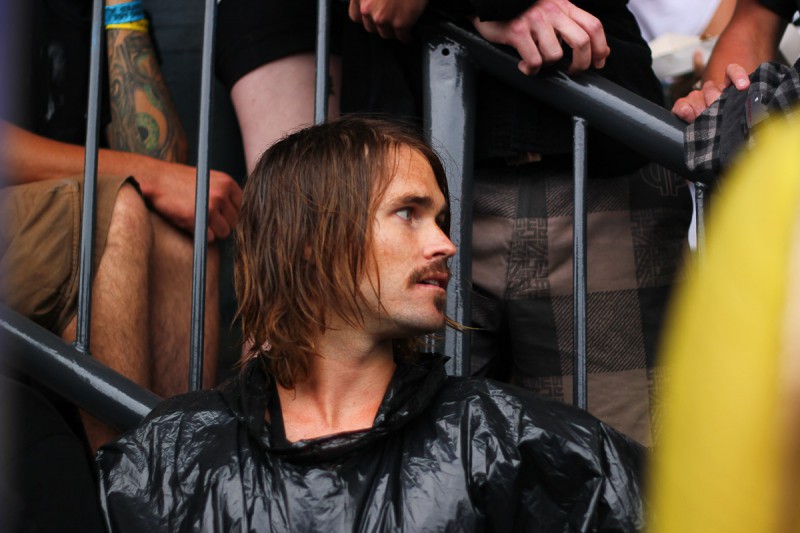 Wet girls were seeking for somebody in the crowd. (I am sure this page will be linked to from various search engines and visited by “wet-girls” lovers. Who does not like them, though?) 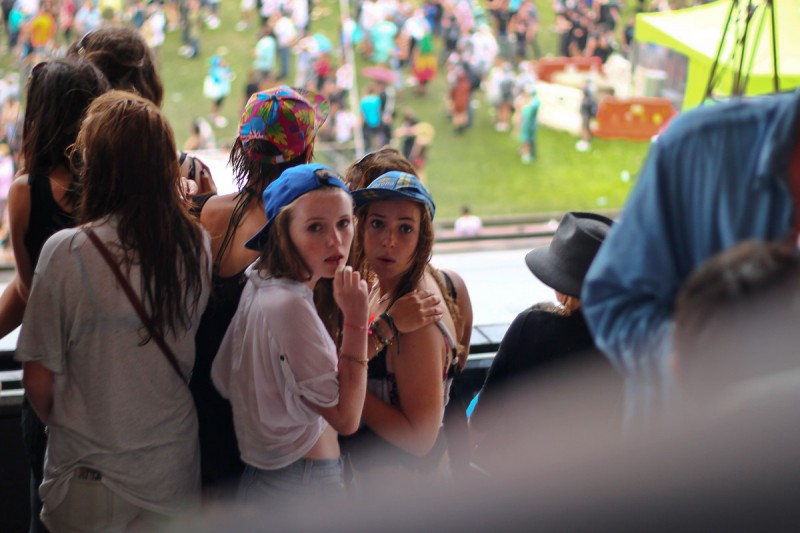 Rammstein is out on the stage. 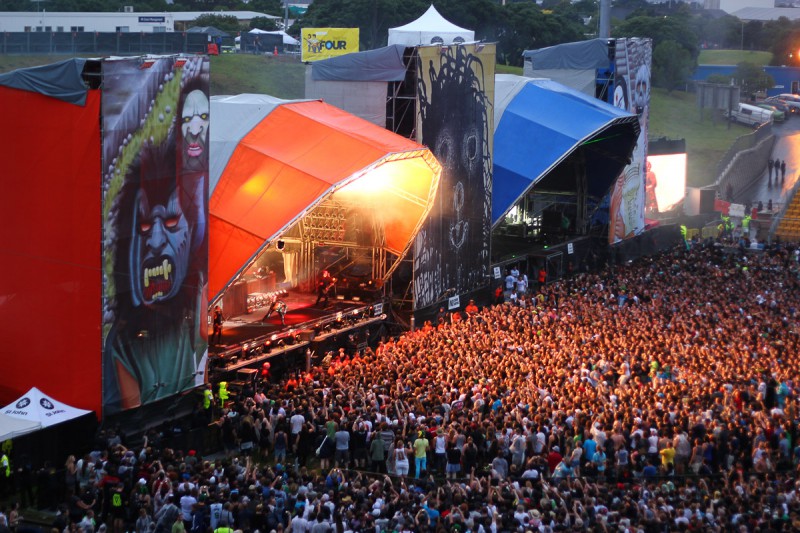 As usual, their performance happened to be a noisy show with a lot of pyrotechnics and stage properties.  It was done quite simple and tastefully. The spectators were stricken. 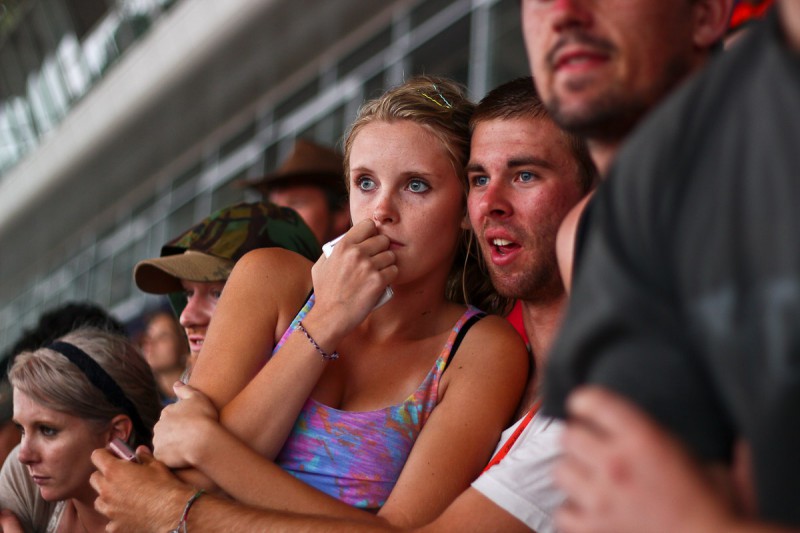 I liked Germans very much. Their performance  was efficient, steady and well co-ordinated. 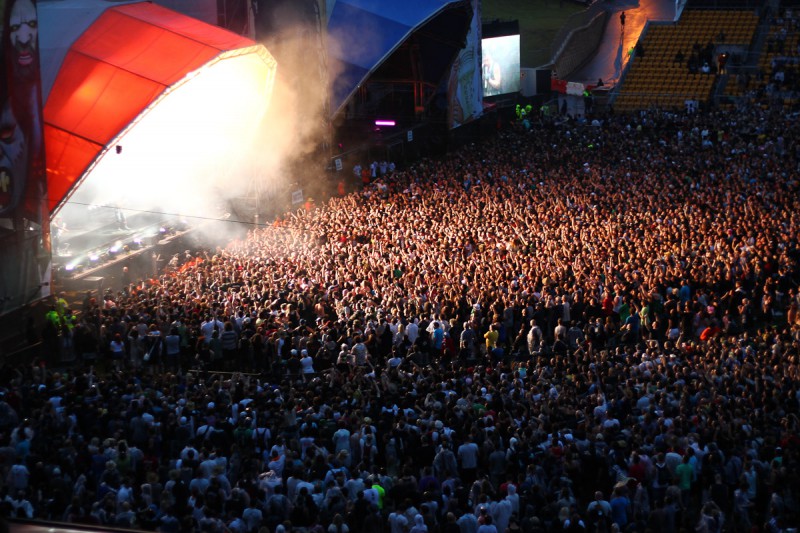 After the sunset, it became dark very quickly. The fellow behind my back vomited almost onto my yellow plastic seat back, so I had to change the place and sit two rows farther from the stage.  I was used to look for something good in every situation and soon realized that the view of the stage and the people from my new position was much better. I made a photo of that girl. 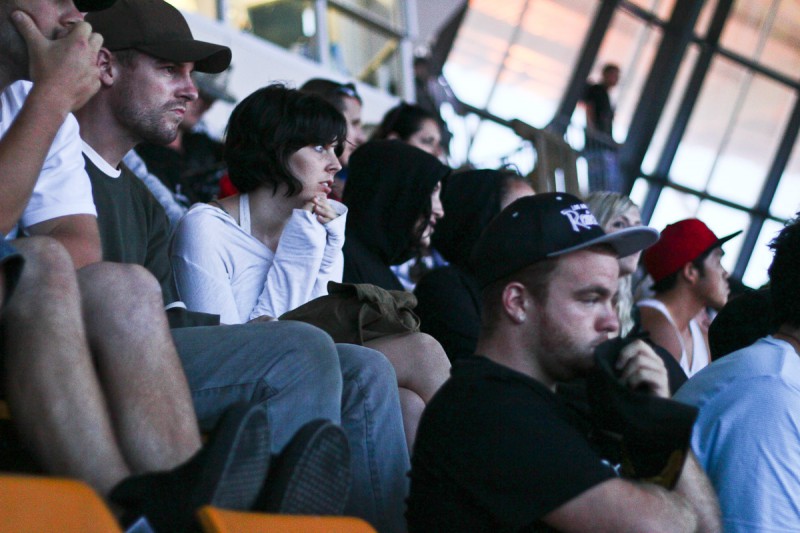 That was an epic ending of the performance: paper pieces, flame, guitar notches and the crowd chanting “You got a pussy, I got a dick”! Quite spectacular. 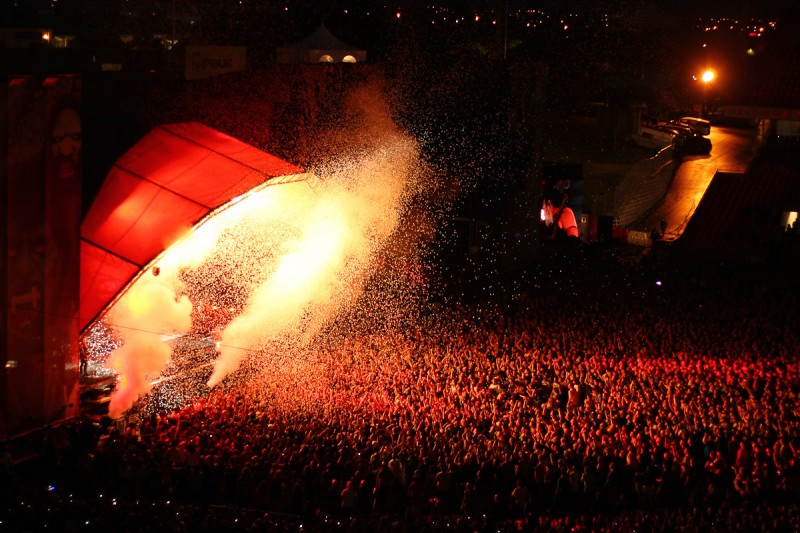 At the time, everybody was waiting for M.I.A. and listening to the LCD Soundsystem in the Boiling Room. In the picture you can see a construction made of tennis balls with colored light-emitting diodes inside. It was good interactive three-dimensional son et lumière. 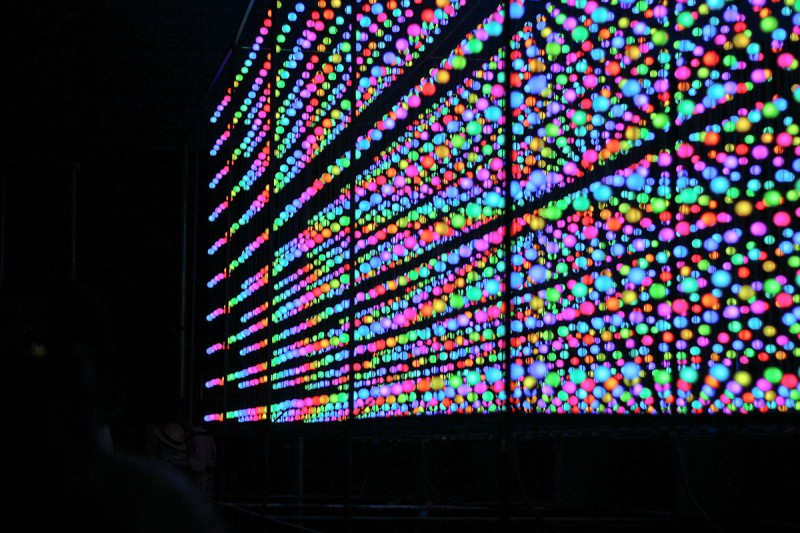 A hipster as it is: glasses, a shirt, torn jeans and sneakers. 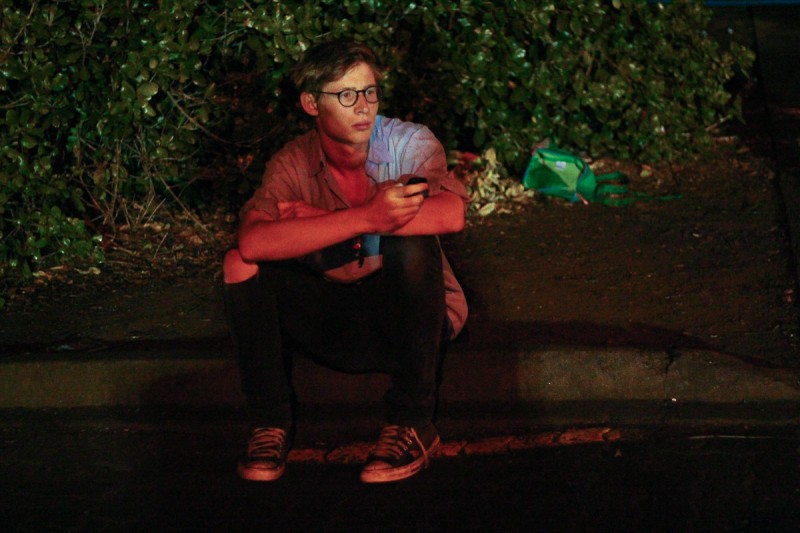 LCD Soundsystem surprised me with their soloist who happened to be of a very unpleasant appearance and sang out of tune, perhaps, because of mistakes of the audio-control engineer. 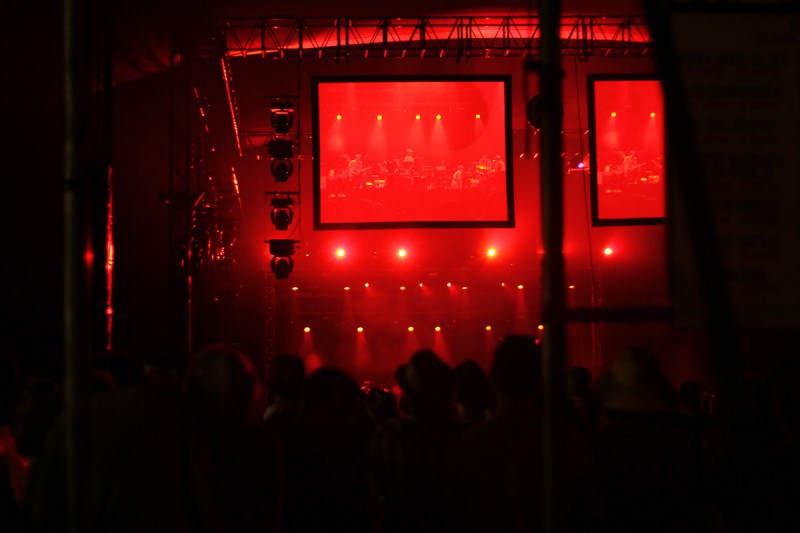 The last chance to buy two useless alien junks at the price of one! Stalls worked until the last customer. 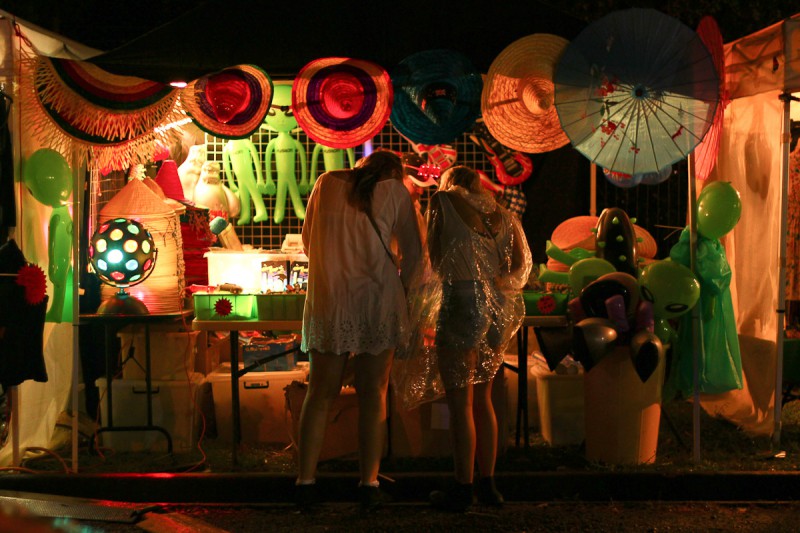 We were waiting for M.I.A.’s performance and went to the Silent Disco room to dry out and have some rest. Every person there had headphones with music played in and  was dancing in silence. Soon people started to leave the Silent room, too. It was after 9 PM. 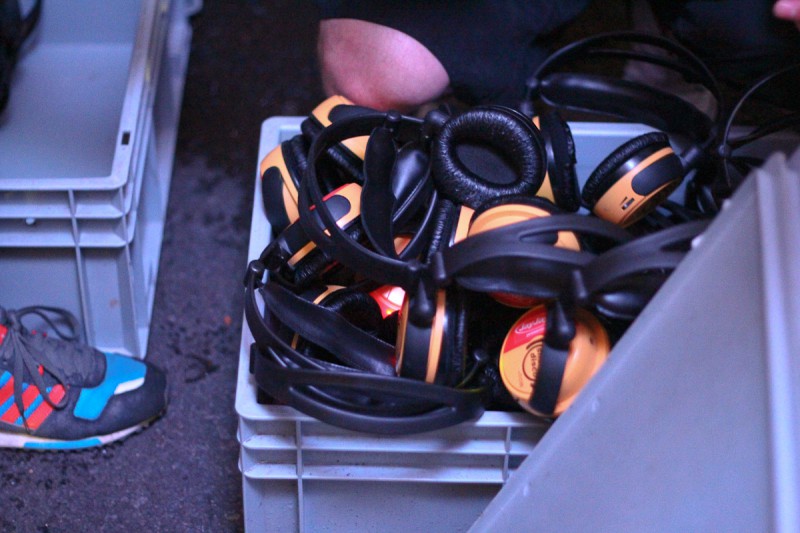 At the time, there was the group Tool on the Orange Stage. The field was hardly lit with weak, even disgraceful, rays from the empty eye holes of skulls raised by the paws of construction site engines. After Rammstein’s fireworks it just could not look in the least bit seriously. So the crowd was breaking up without spirit. 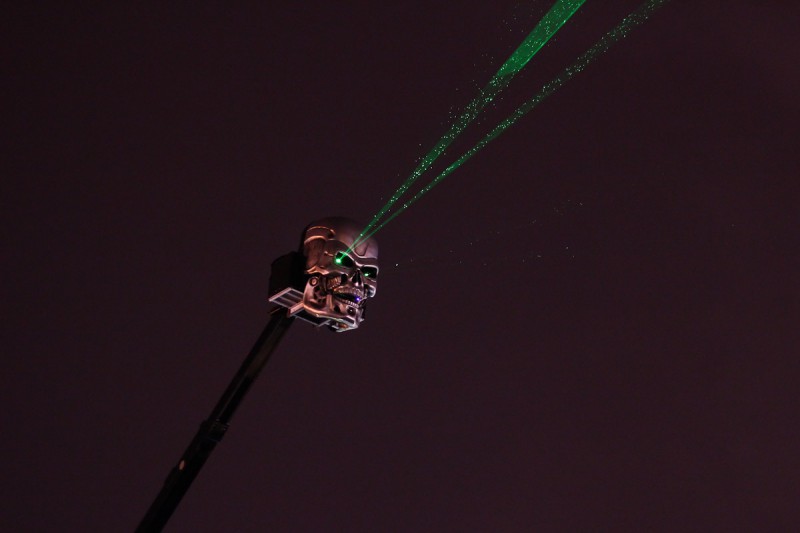 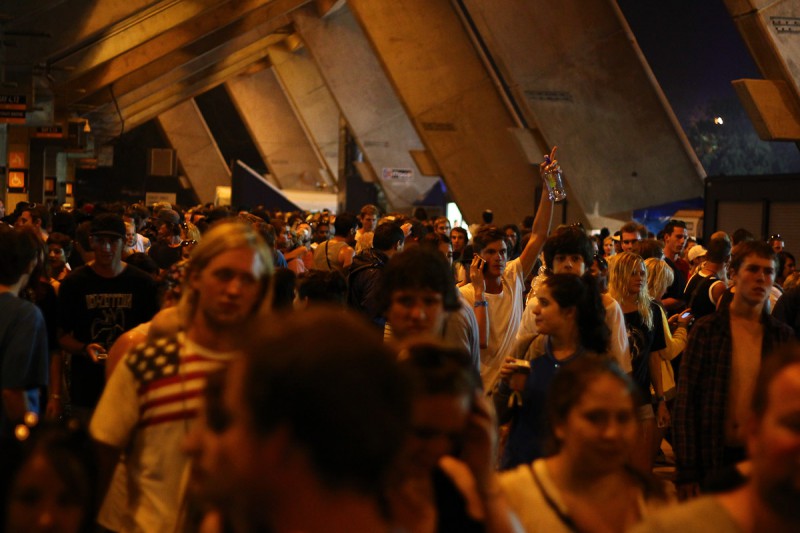 The more resolute sellers kept selling disgusting hot-dogs and something like burritos. But people were not squeamish even about that kind of food after the whole day of roaming from stage to stage. 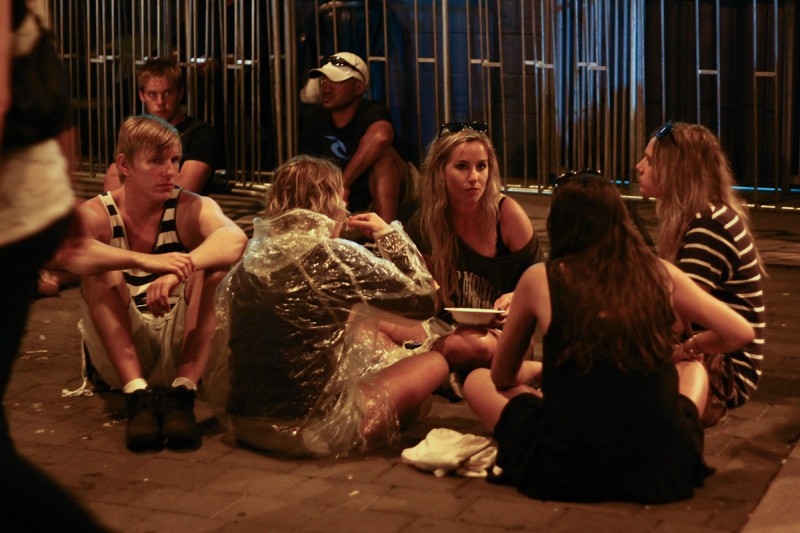 A nice girl with a pink iPhone, she was not very wet. 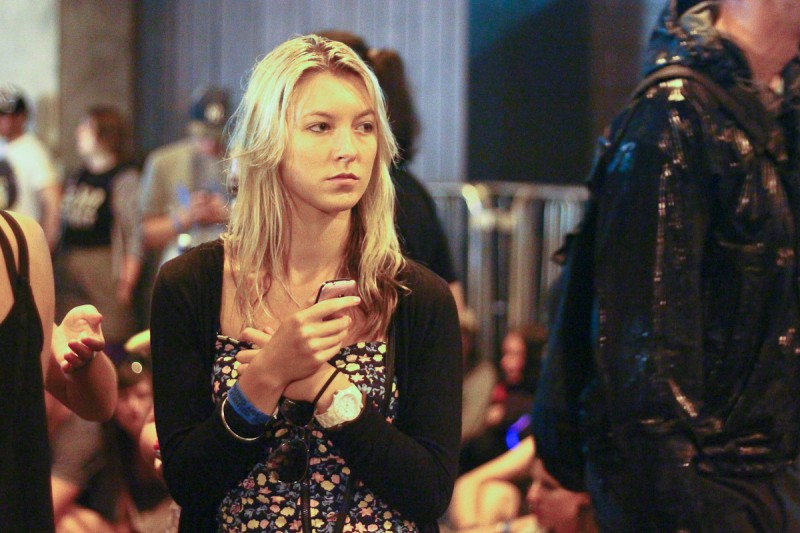 M.I.A. happened to be aggressive and noisy. Perhaps, it was not what the tired spectators wanted at the time because their reaction was rather inert. The music gave the kick to those heavily drunk only — like the guy from the first photo of the post. I didn’t like M.I.A. almost at once and we decided to go to the exit. 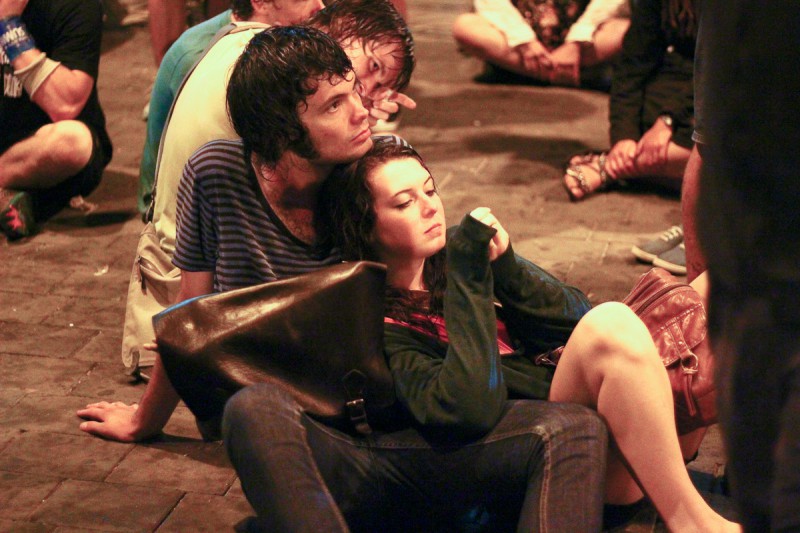 On the way, I’ve made some photos of unknown people. This is the last photo of four posts about the annual musical festival “Big Day Out”. 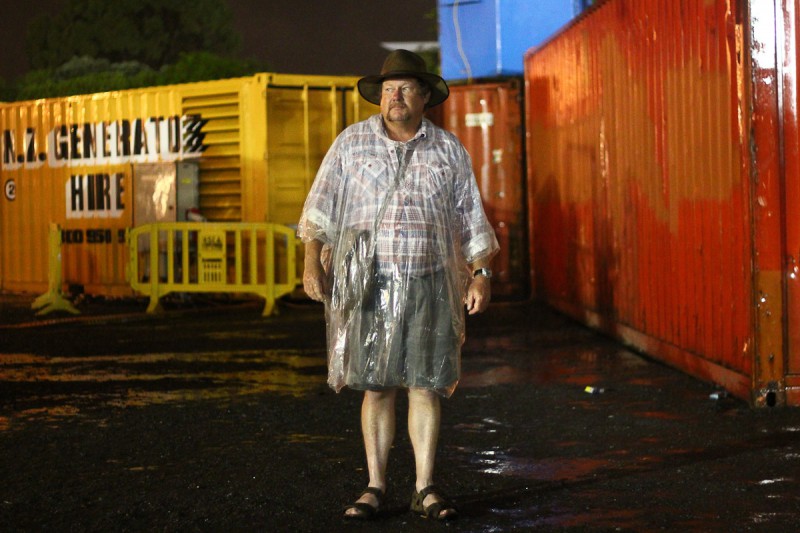