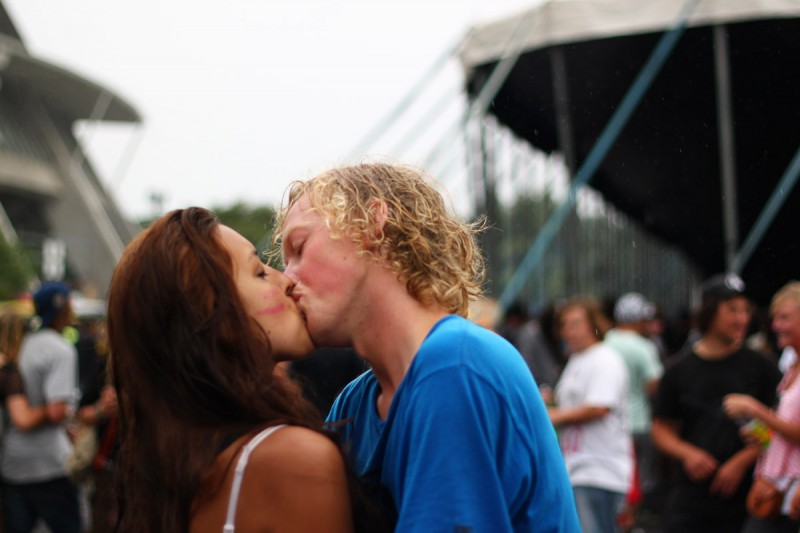 As I have promised, now I continue to post photos from the musical festival “Big Day Out” which was held in the end of January, 2011. In the photos you can see people caught unawares. They are different: young and not very young, extravagant and very common. In the whole world they are called “Kiwi”.

There are about thirty photos with comments. The photos are clickable.

A heavy metal fan of the “sisadmin” type, whitish-pink due to the sun burn, is resting after jumping in the “heavy” sector. 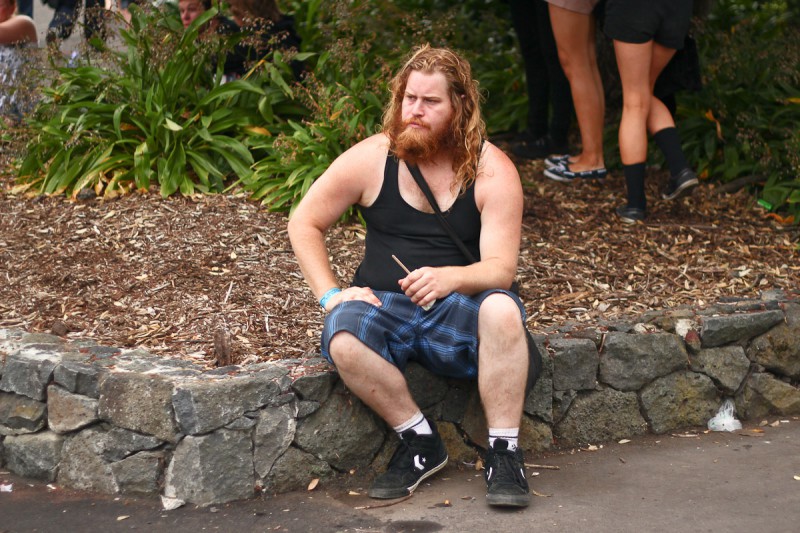 A woman  is selling ice lollies and smiling in a confused way. The weather was expected to be hot but it happened to be rainy and wet so there were no lines in front of her stall. 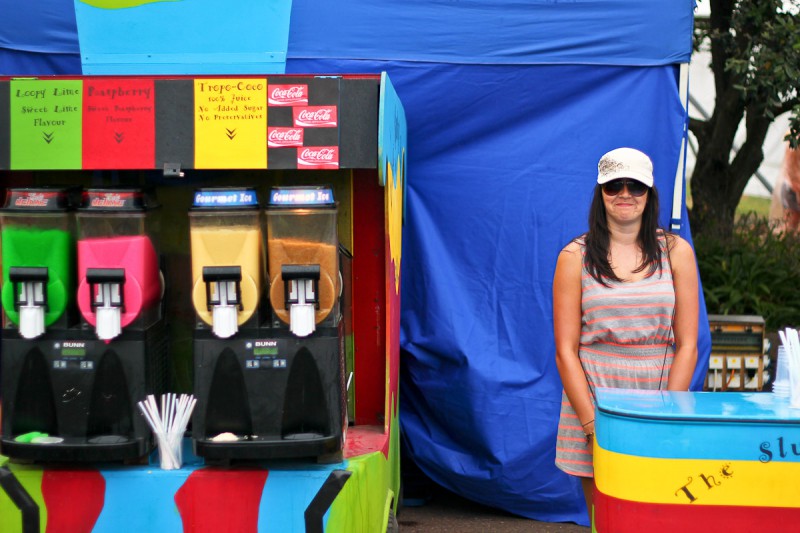 Policemen sometimes asked people if everything was OK. That Indian seemed to be OK.  As for policemen, they always had guarded looks but that was their job. Last year, as I remembered, everybody wanted to be photographed with them, and people, drunk and drugged, really had the pictures taken. 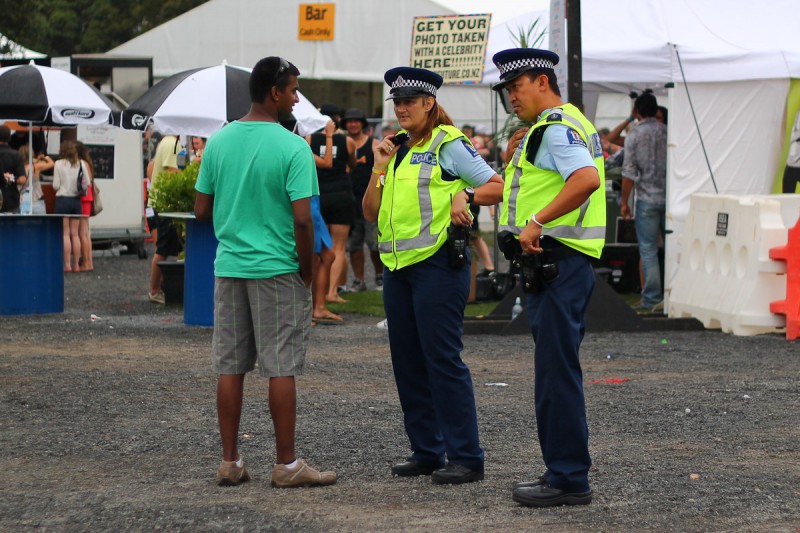 You, young man with long hairs and in a long T-shirt, the girls from the posters keep their beautiful eyes on you! 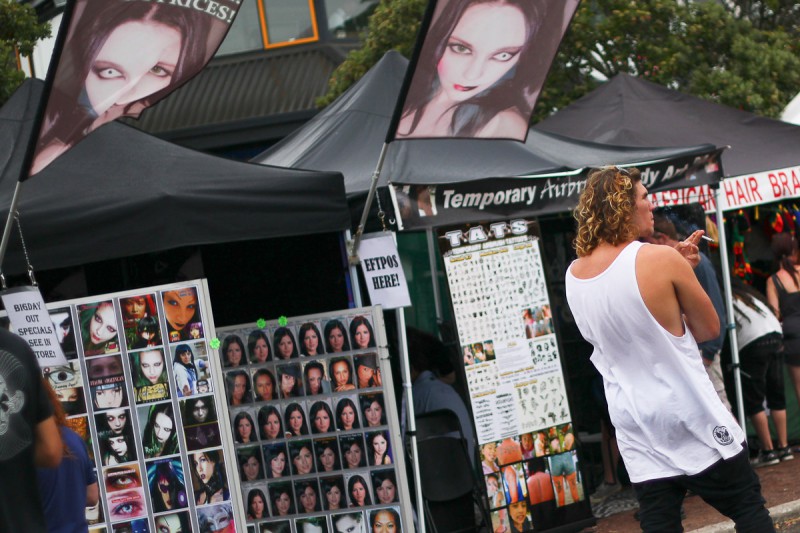 There was nothing to do at the festival but listen to music, seek  for the friends lost somewhere and do shopping in dull stalls. All open amusements were popular and there were lines of people interested until dark. 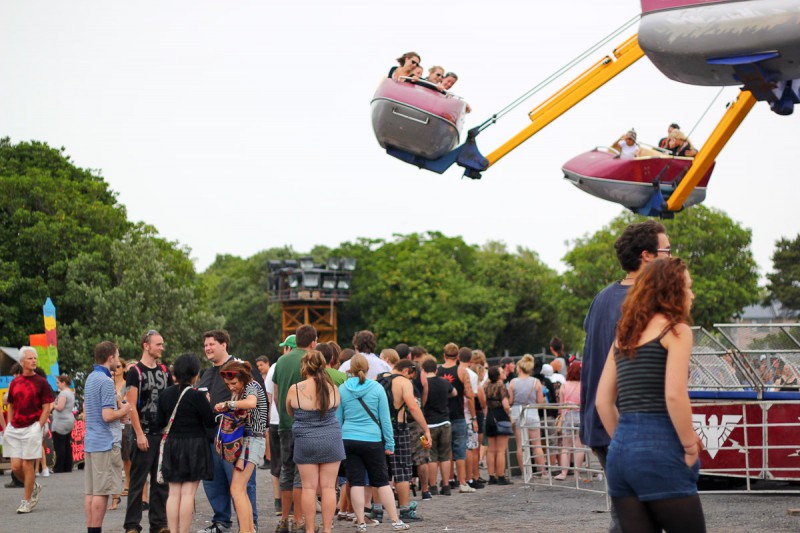 As one can notice, a person in the background is selling plastic raincoats and polyethylene ponchos at the price of 5 dollars. In the foreground, there is a New Zealand format of pear-shaped girls. 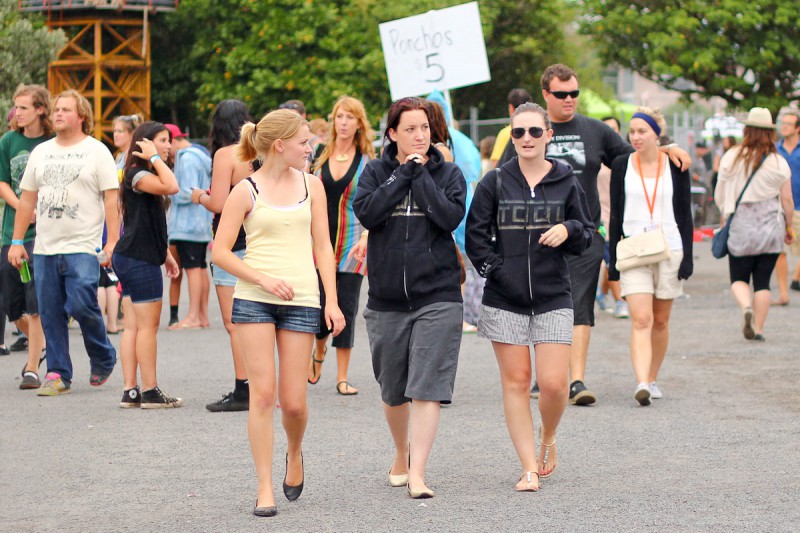 The inscription on the yellow trailer, where fatty-and-sugary products were sold, said, “Over 14.75 billion sold worldwide”. 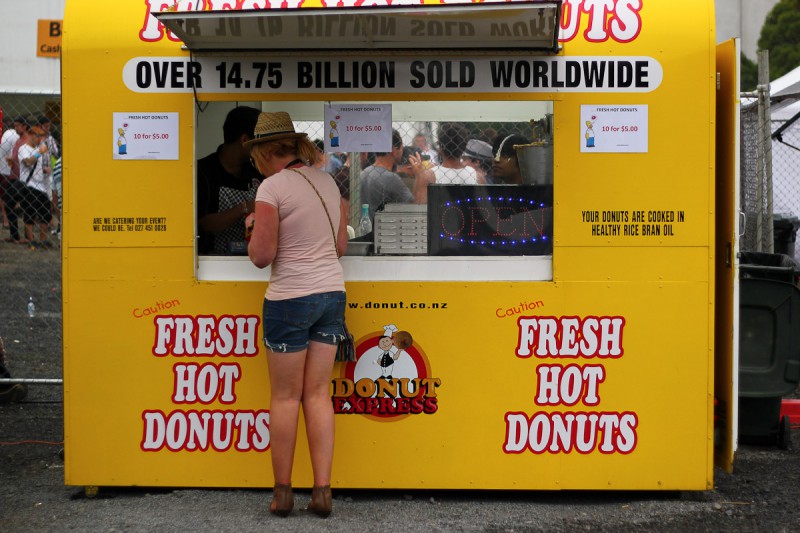 A non-drinking man is communicating with his friend who is by no means averse to a couple of bottles of beer in the “alcohol zone”. The sale of alcohol products at the festival was bounded not only with regard to age but to festival areas, too.  Special people checked IDs and put colored bracelets on people’s hands. Alcohol was to be bought in special enclosed areas (cigarettes were not sold at all). The alcohol purchased was to be consumed in the same area. There were several stages with music for “alco-people”, but the music  was, I’d say, indistinct. 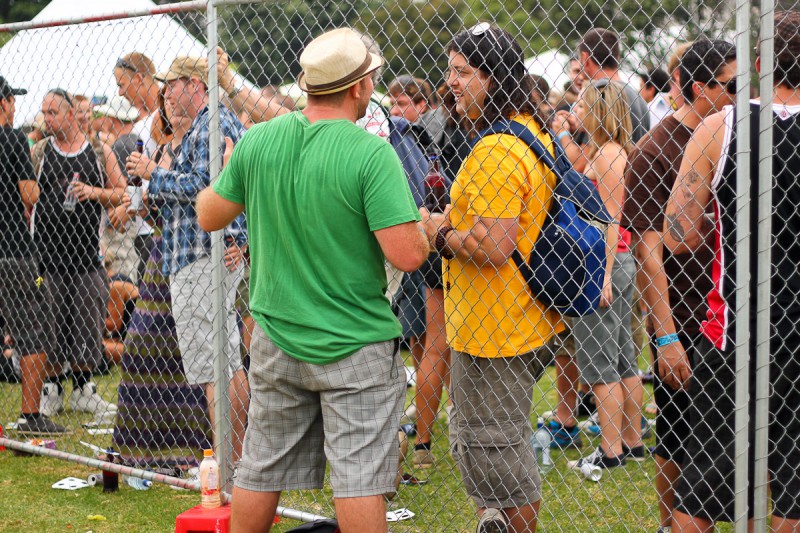 The lady without the dog but in a hat. (By analogy with «The Lady with the Dog» (Russian: Дама с собачкой, Dama s sobachkoy), a short story by Anthon Chekhov, which was first published in 1899. It tells the story of an adulterous affair between a Russian banker and a young lady.) 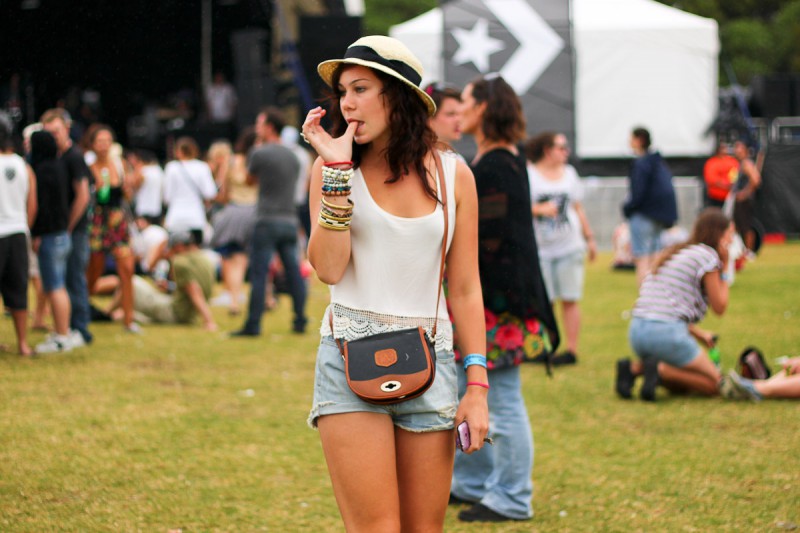 Some guys protected by an unworried guard are resting in the alco-area. 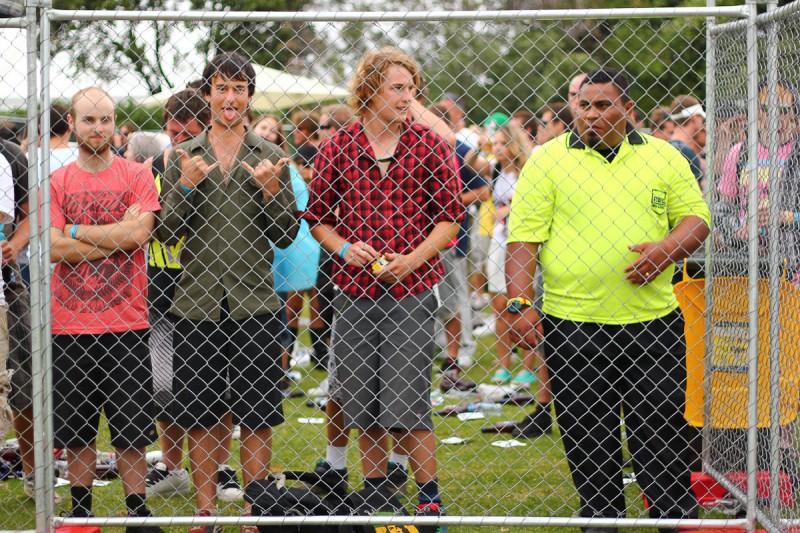 Nice people. While being at the festival, I’ve met them several times here and there. It is up to you to decide whether they are hipsters or not. 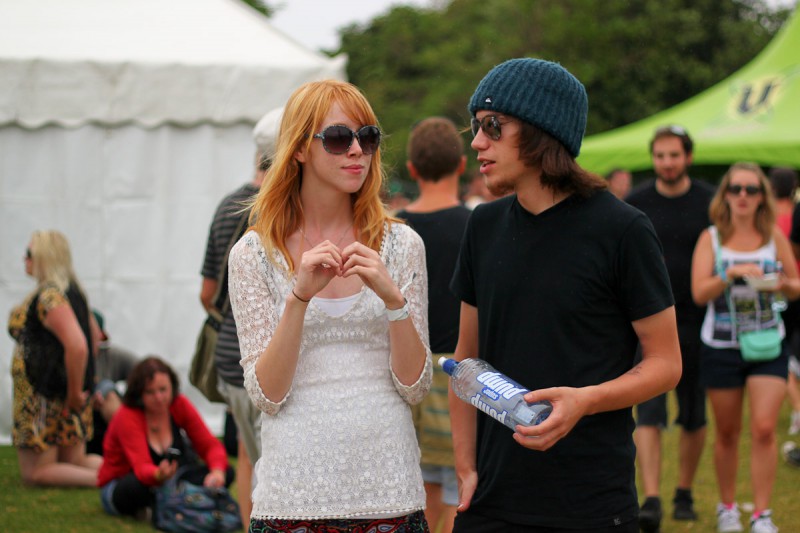 Two hippies on the grass. One of the girls is wearing the very poncho which has been sold a few photos up. 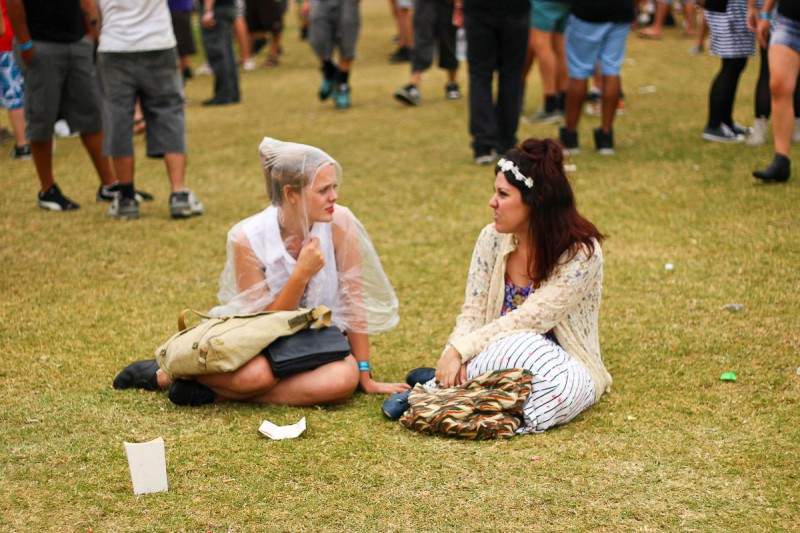 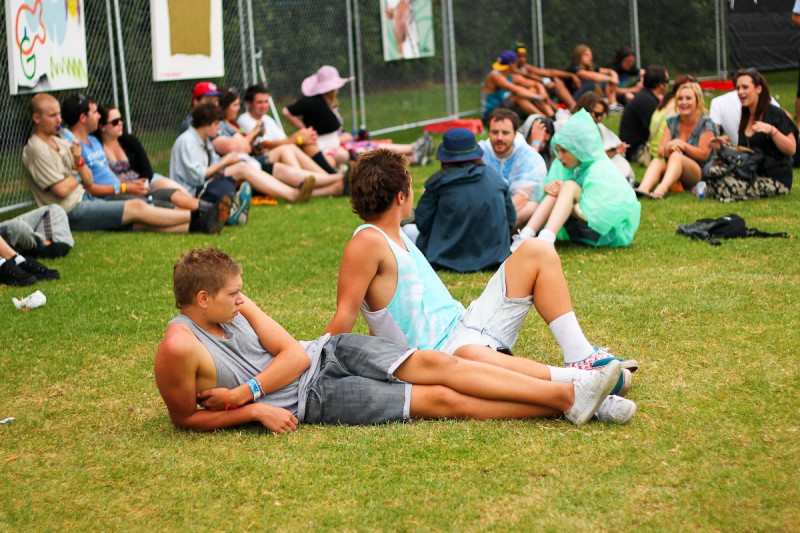 As for the girls, they are dancing around a microscopic bag. 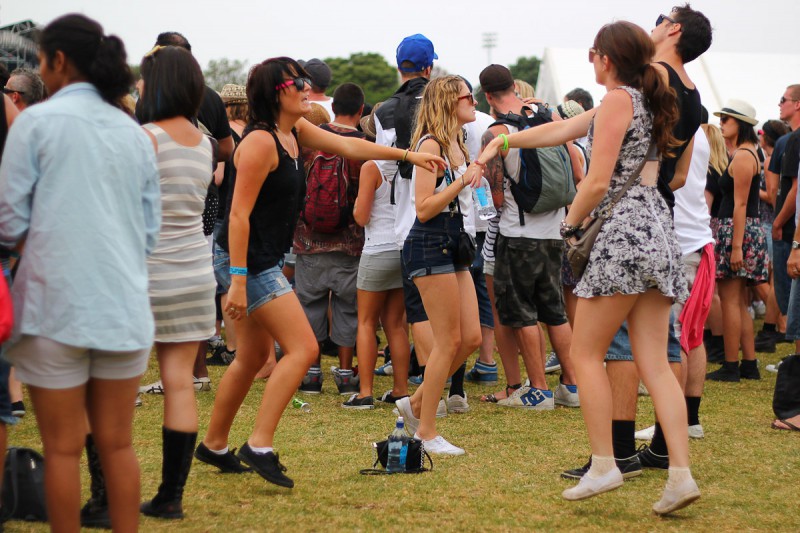 A brutal woman of the style of the 1980-s. A large area of her bogy is covered with tattoos. I almost collided with her as she was barging through the crowd in a very resolute way. 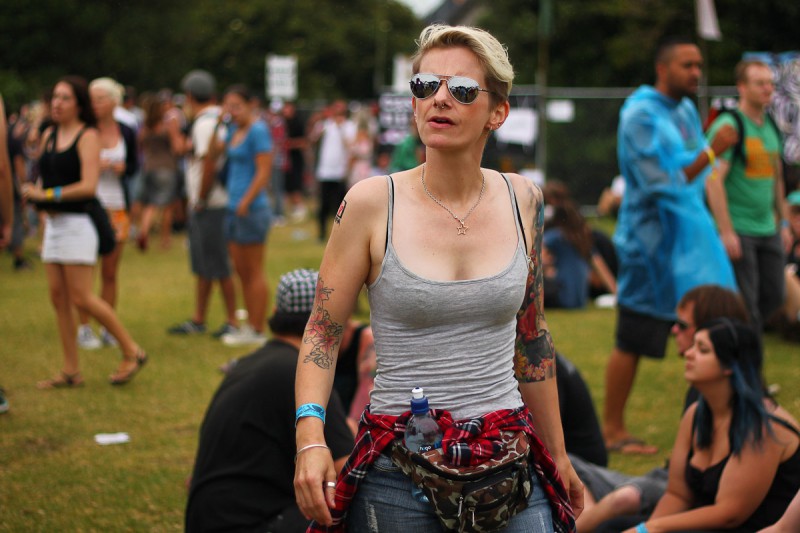 To promote various Halloween goods, the guy was dressed as a monster and made to frighten the girls passing by. But the girls happened to be brave and wanted to be photographed with him by all means. 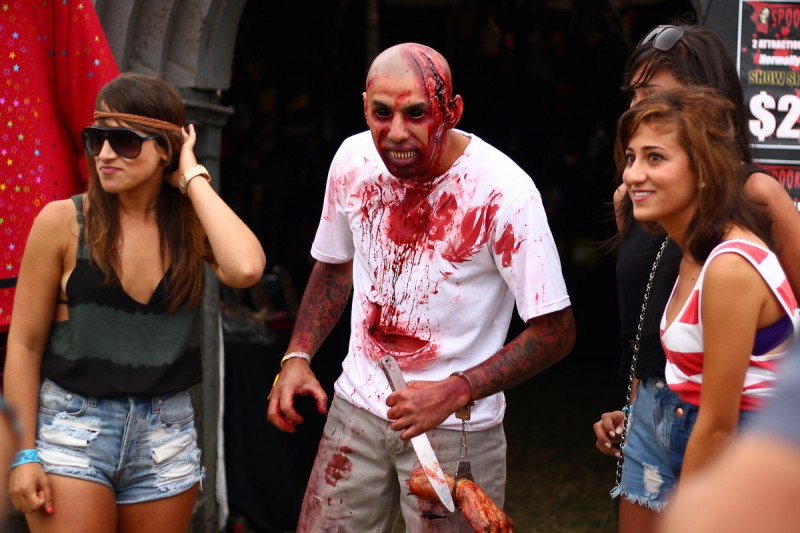 A girl in the style of Woodstock with wet hair looking thick. The Article. Which means she is younger than eighteen. 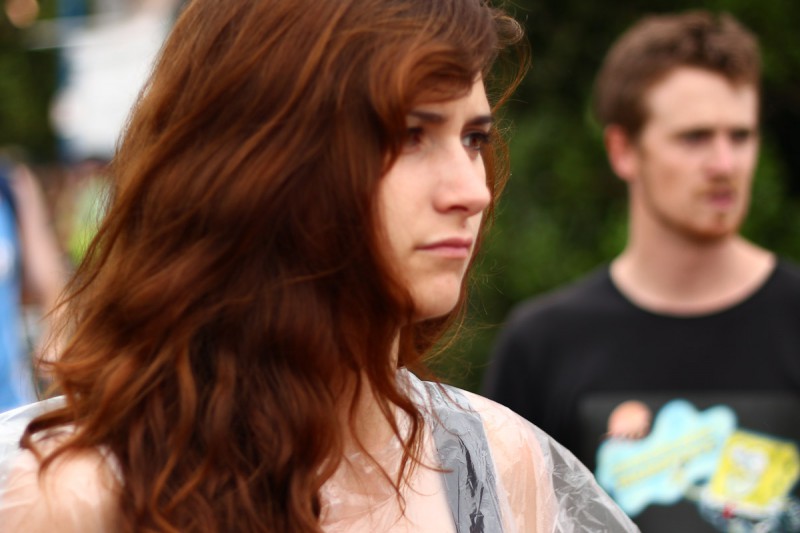 And again minutes of worried waiting. As I have repeatedly said, much time was spent on seeking and waiting for friends and acquaintances. 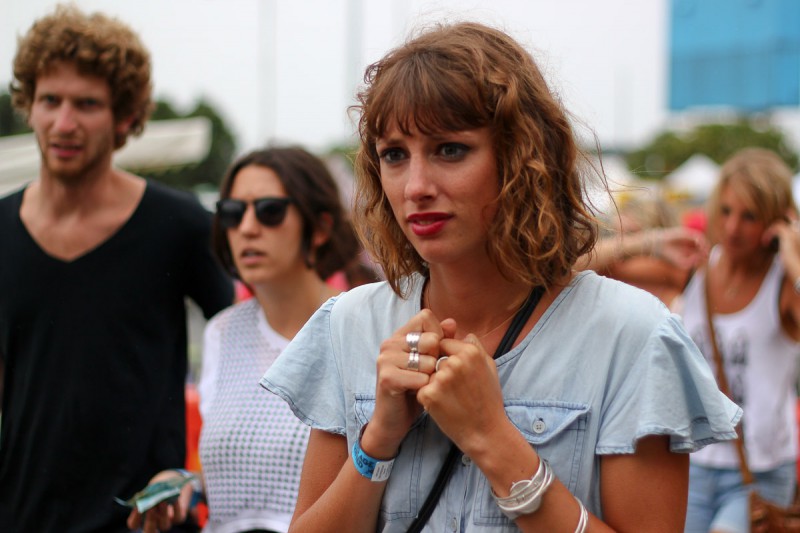 A nice blond is waiting for her boyfriend in the alco-area. It is his bottle there in the right part of the frame. 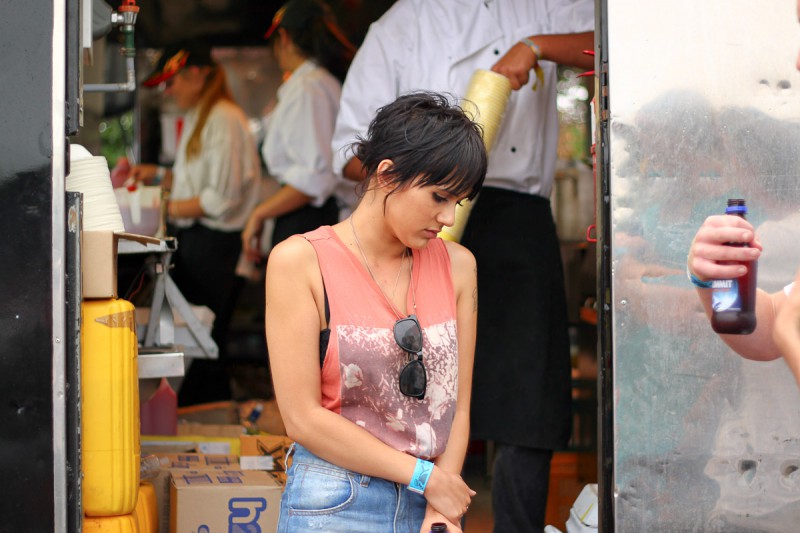 As you can notice, I like the umbrella and its faint colored reflection. 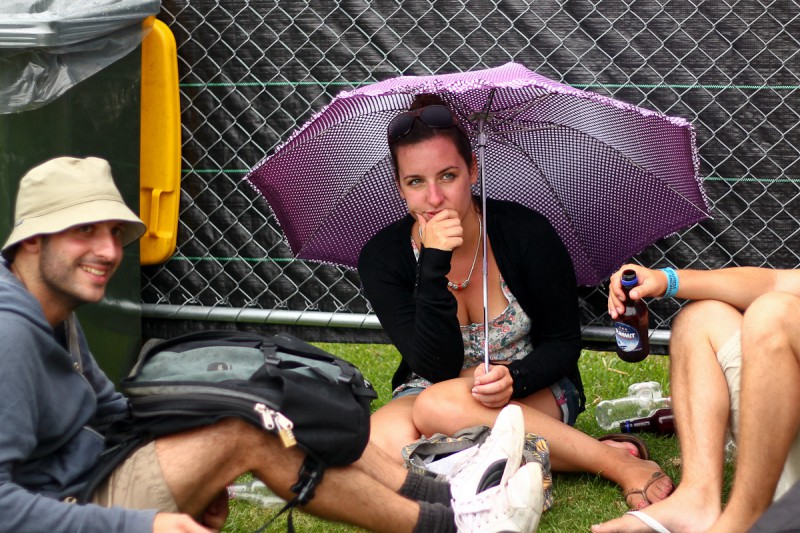 A small group of children-flowers in the alco-area. I think that my attention was focused on the blond with a blue headband. 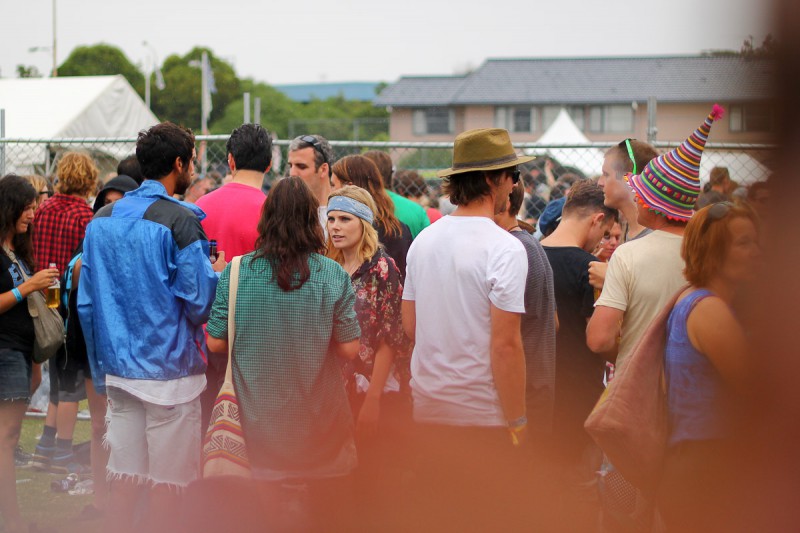 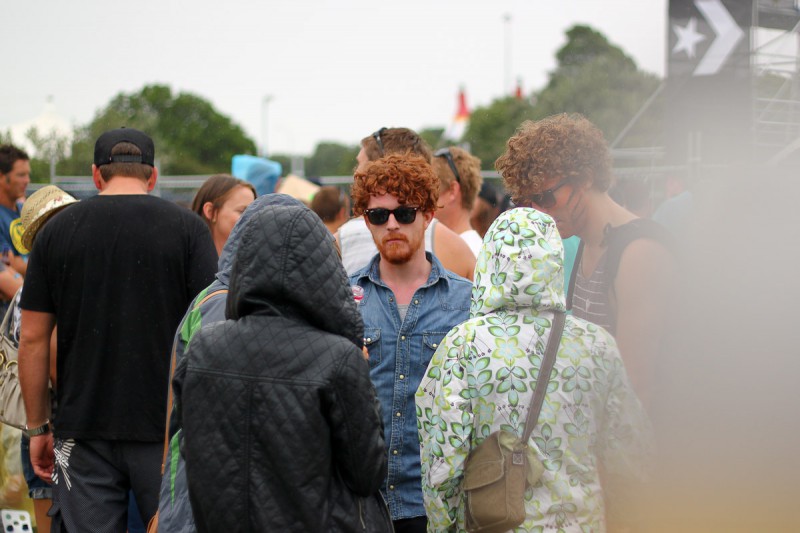 What was the man in a blue hat short of? Some footwear, I guess. 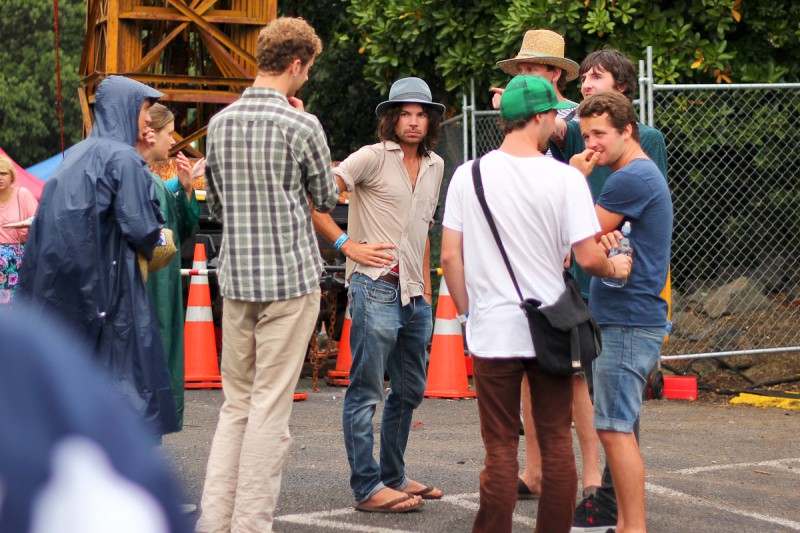 A Kiwi girl under a tree. 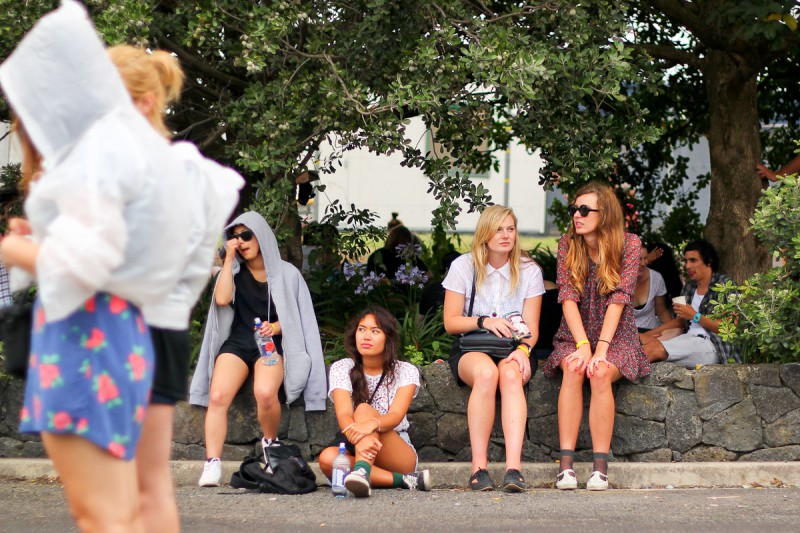 A thoughtful man in lowered pants and black trunks is filling his rucksack with water. 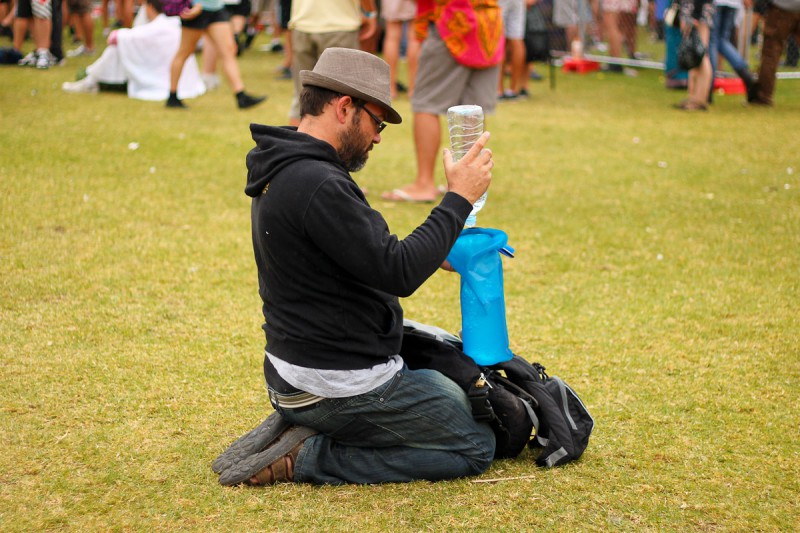 Perhaps, it is one of the best photos of today’s set. 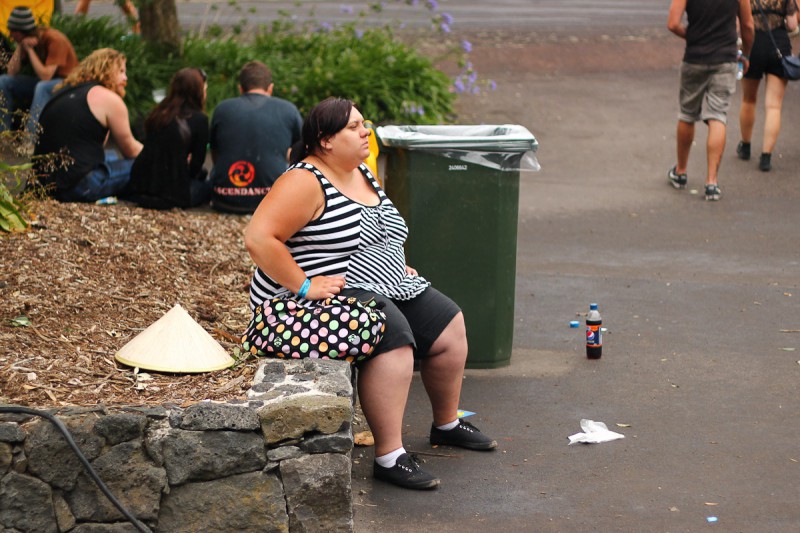 The rain drove faster, the sun was setting. 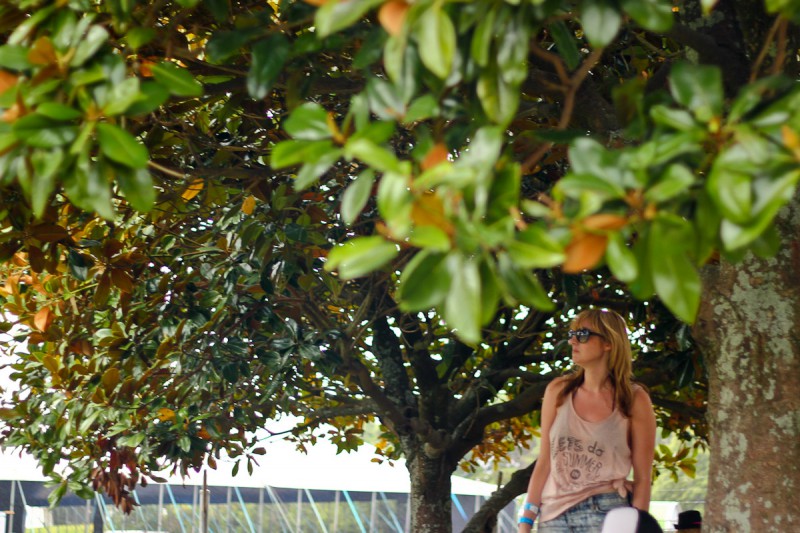 That girl-ghost did not like that I was making her picture. Then we talked, smiled to each other and exchanged calling cards. Still waiting for her to write. 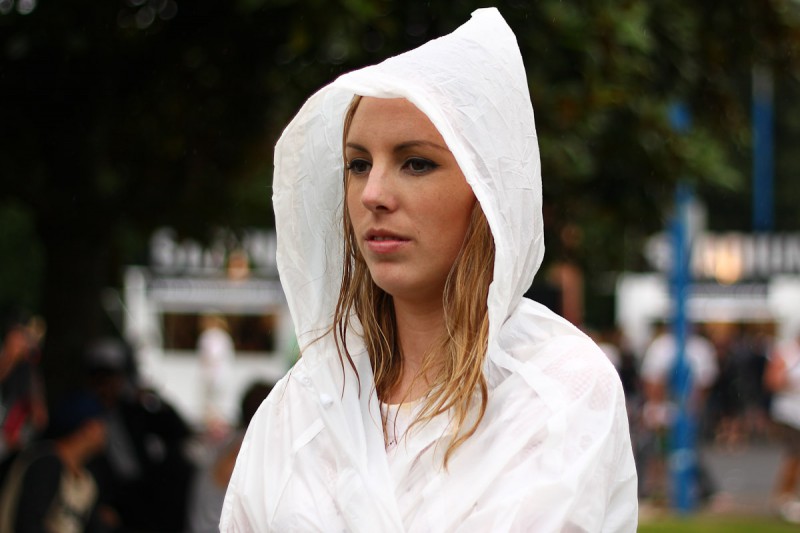 This is the end of the third post about a musical festival “Big Day Out”. I hope the blog’s readers have got the idea what the local youth really is at rest. I think you will admit that young people look rather civilized.

I believe there are enough pictures left for one more post. I will post the fourth part after I will tell about Cook tropical islands where I have spent a short vacation lasting for 10 days.