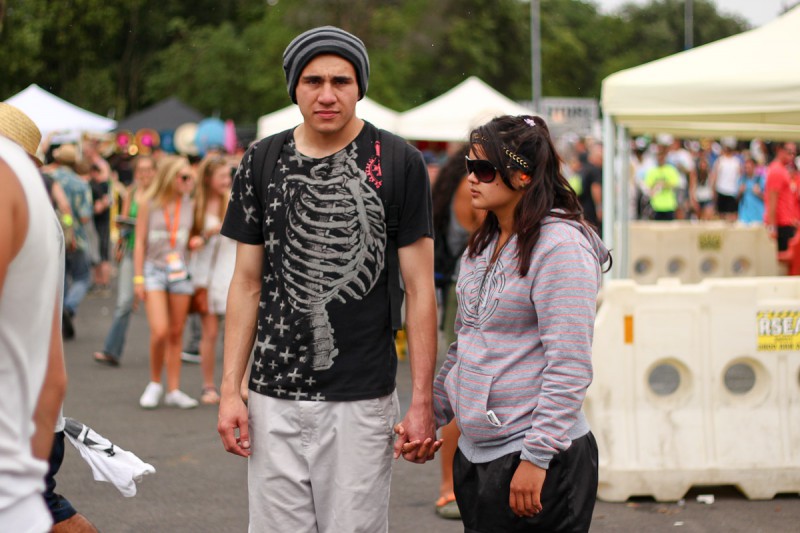 Spectators are out in the rain. The exposure is short, one can notice drops in the air.

Today I continue my photo story about the festival “Big Day Out” which took place in Auckland in the end of January. I have simply taken a few pictures from the folder, and I will tell you about each of them throughout the post. All the pictures are clickable.

I don’t know what impressions you get from this guy with a hippie girl-friend but as for me, he seemed a good deal like Mister Bin. He was standing erect like on parade. 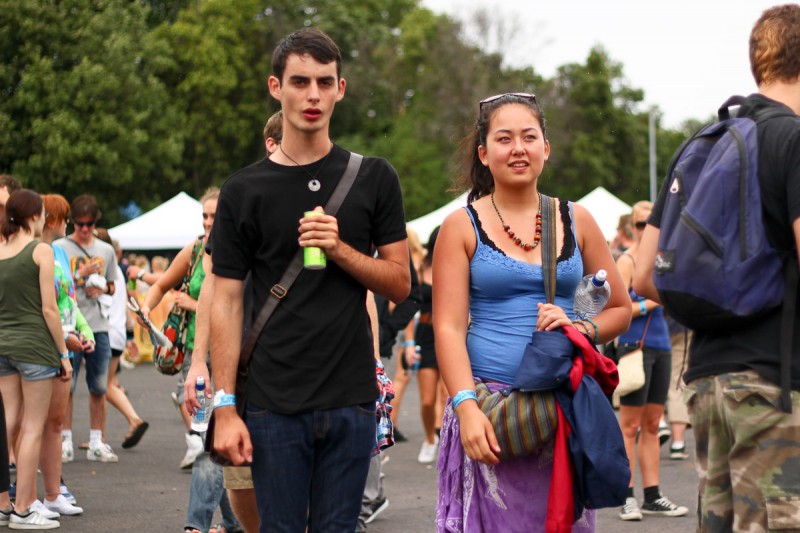 Traditionally, people were dancing in the open because it was hot and crowded in the “Boiler-room” — in the electronic-music marquee. In the background there you can see logotypes of Silent Disco, I will tell you about it a little later. 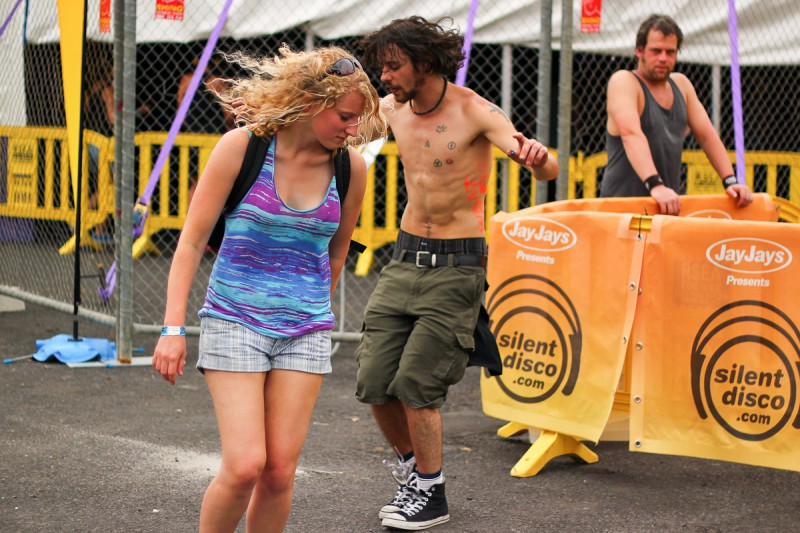 I tagged after the accredited photographer and made circles around the “Silent Disco” marquee until he finally chose the angle and turned to his work. 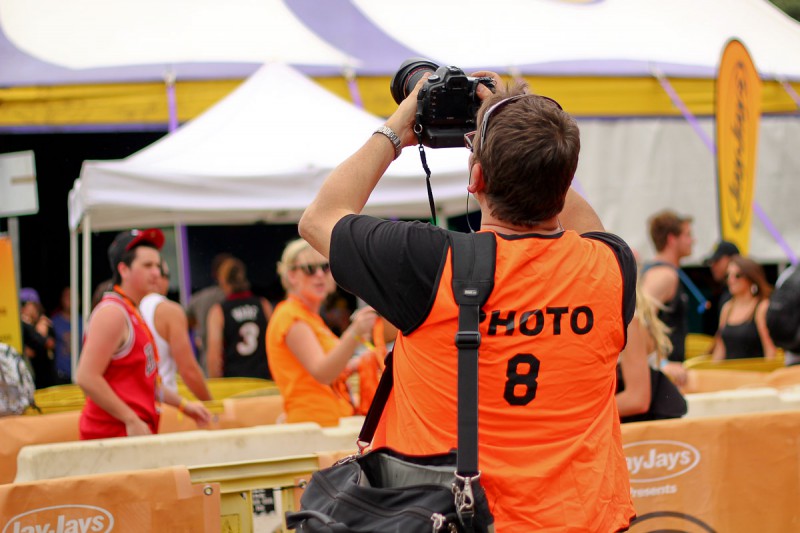 As one can notice, young people being a pride and joy of New Zealand are wearing gym shoes which are like Shanghai shoes, long and wide shorts similar to boxer shorts, and jerseys which remind sailor’s striped vests. 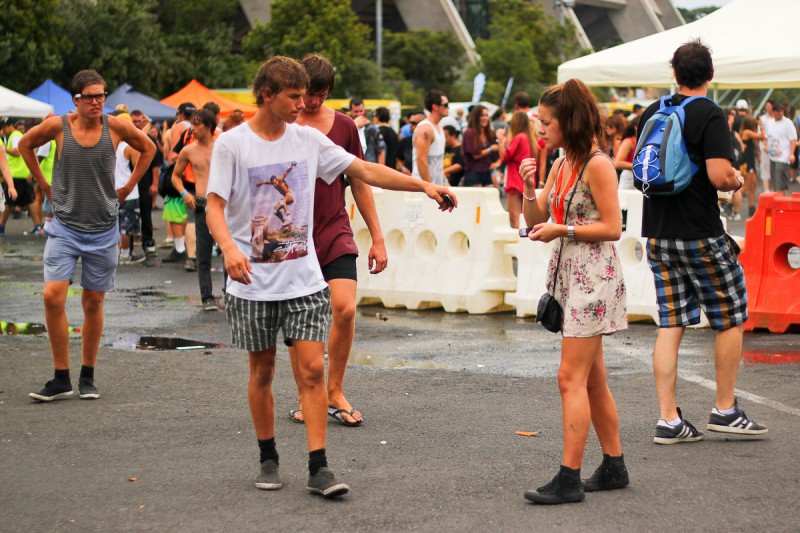 As I have already written, the marked part of the festival time was devoted to waiting. That boy who just didn’t “give a shit”, as it was written on his T-shirt, was standing with that kind of a sad and anxious face expression for about twenty minutes. So, he did “give a shit” about something. 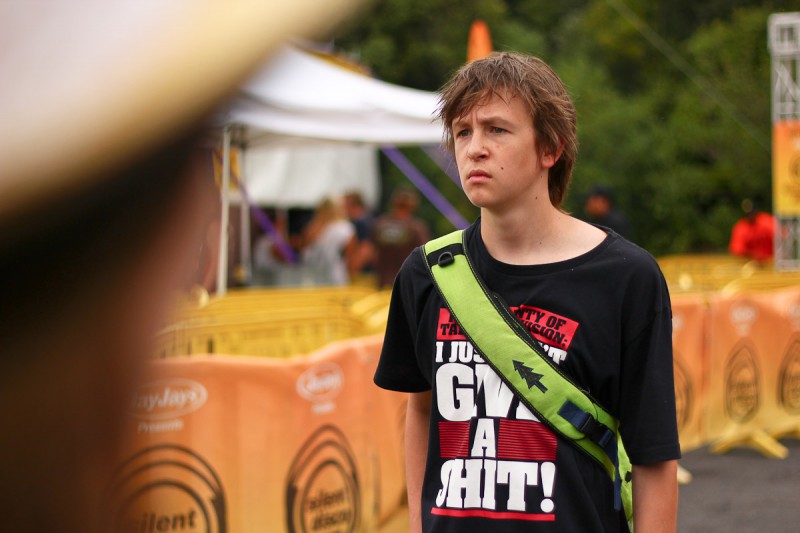 It was as though the boy in a cap, which reminded the helmet of a storm trooper, was saying to the girl looking like Scarlett Johansson, “He has gone in this direction, oh no, in that direction.” 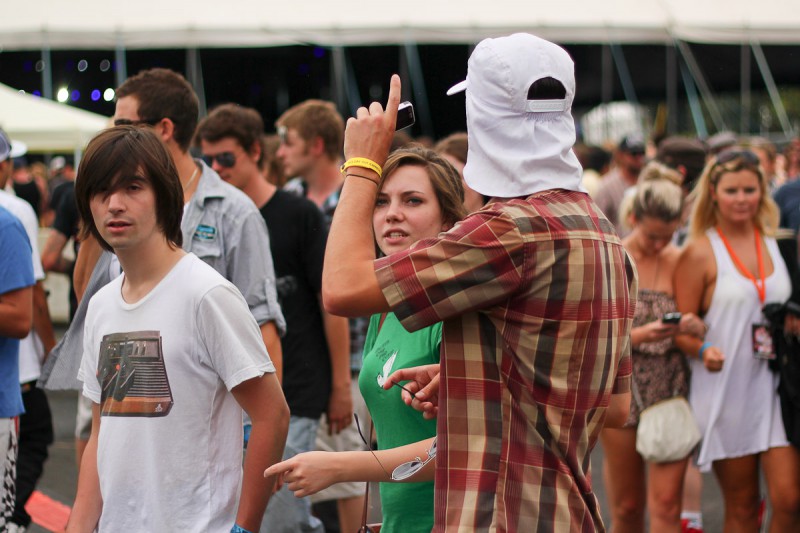 That boy is apparently not a Russian boy, and that cap is obviously a Russian fur cap with ear flaps. 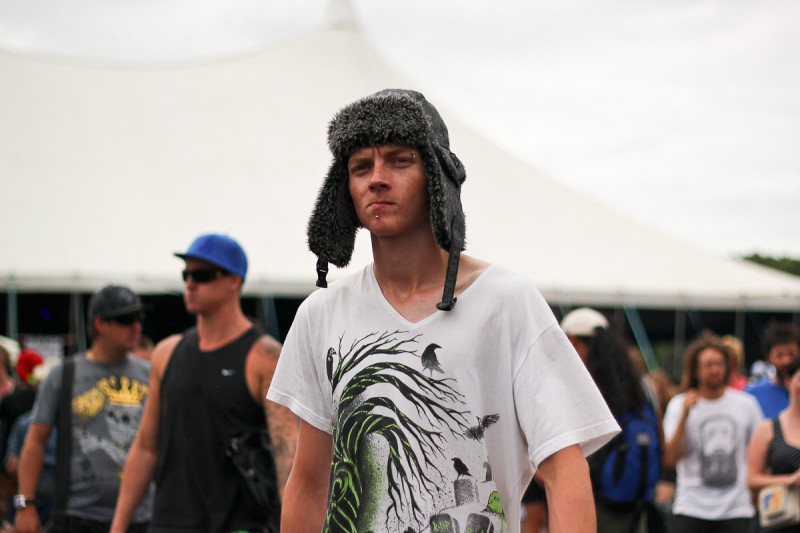 A modern festival guy with a phone matching the color of his glasses. 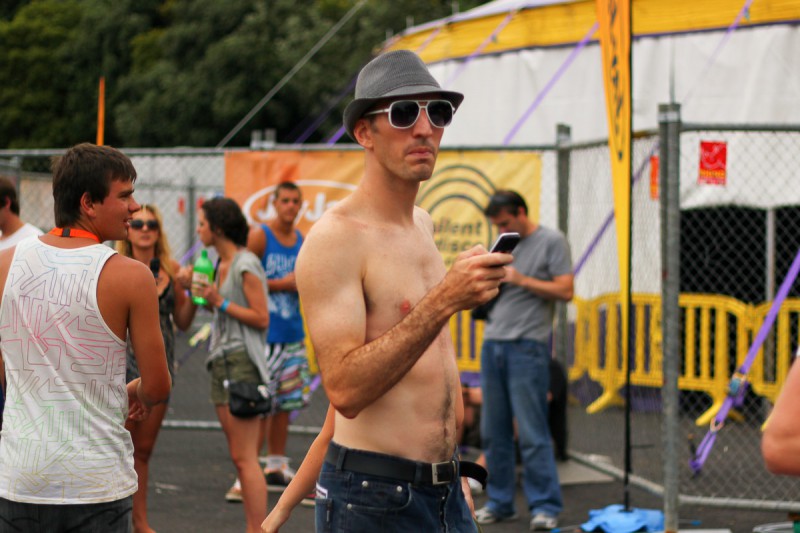 I wonder why anybody living in a city with a million of population should have been standing and choosing a cool summer dress in a small stall at the time when the Iggy Pop were just about to go on stage. 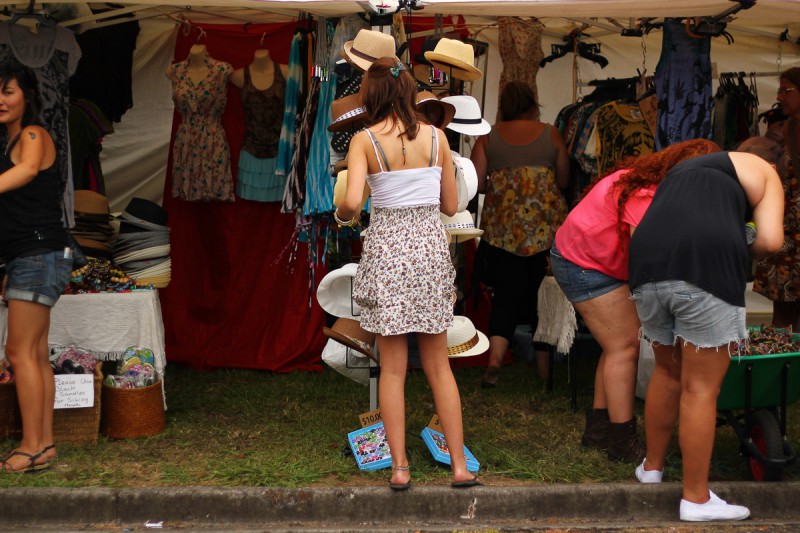 All right, I admit that I didn’t get whether the girl pointing a finger at somebody, was wearing some kind of a swimsuit or a suit for aerobics.

A bit of a Kiwi first-class fellow is resting on the asphalt. Yes, the asphalt is to have been covered with spittle, bottles and cigarette butts but as you see all is not so bad. In a second the fellow will sure put his tongue out and make “V” with his fingers which will mean “Vnimanie, idet syomka” (from Russian — “Attention, photos are being shot”). 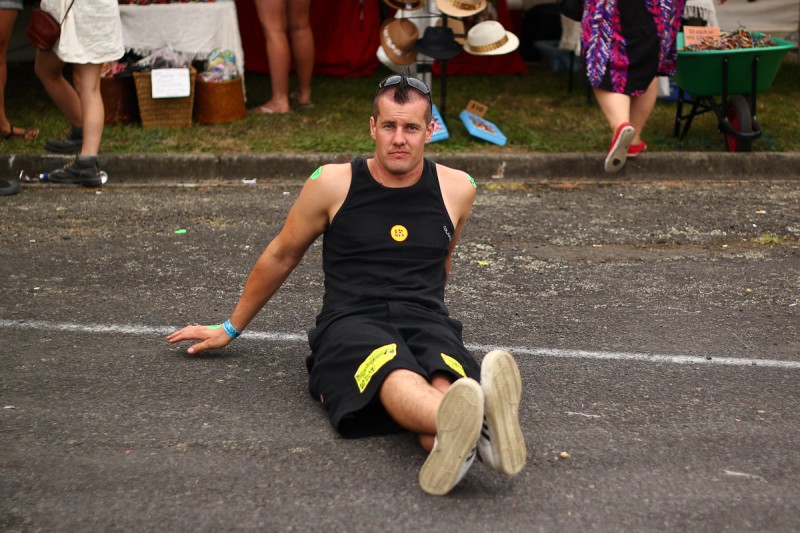 Judging by muddy legs, that graceful girl has just returned from the field. Rain and jumping teenagers have turned it into something of a dirty pool here and there. 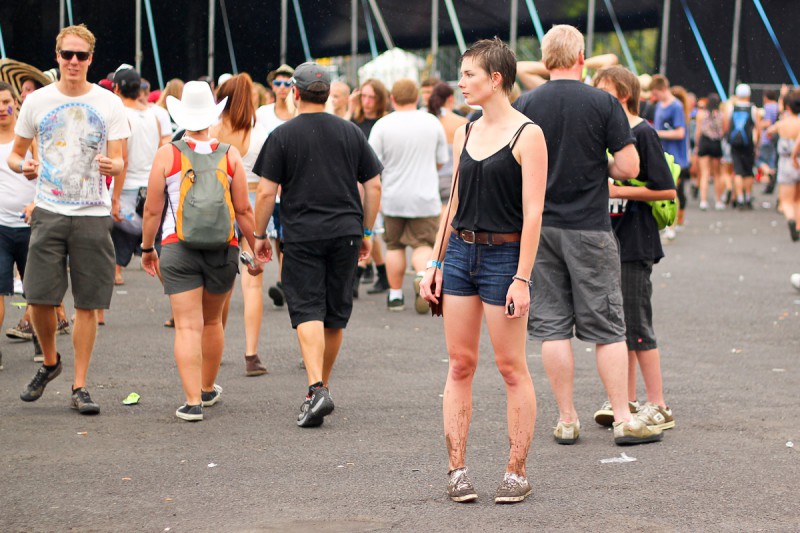 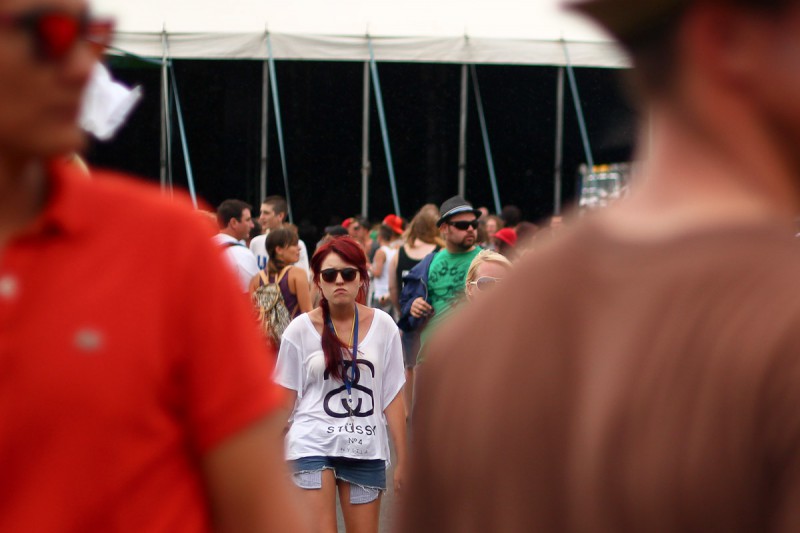 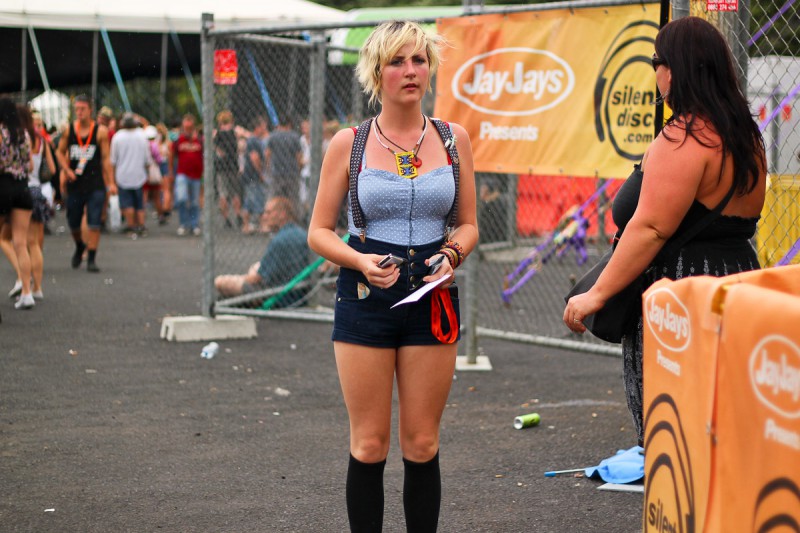 A traditionally stooping Kiwi girl with lots of straps. I noticed that tendency the very first days here in New Zealand, in November 2006. 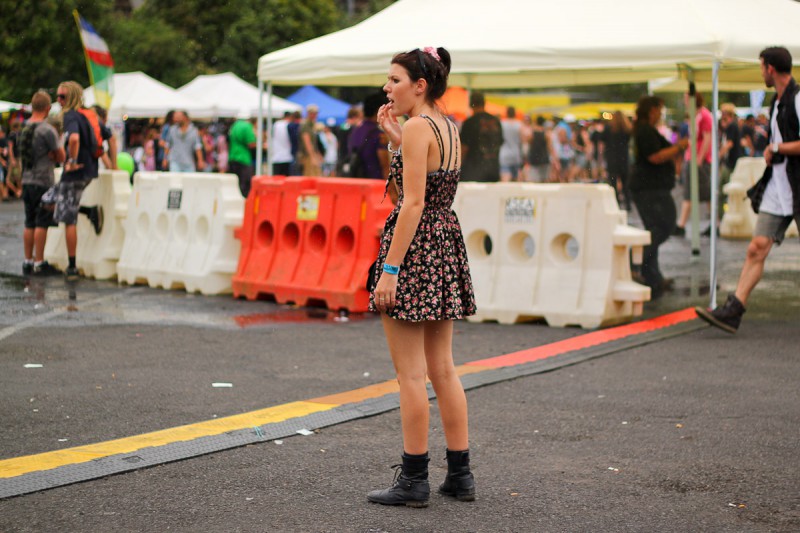 In the “Silent Disco” marquee the visitors were given radio earphones, in which everyone could choose one of two channels and adjust the level.  Live DJ s ran two absolutely different sets which were often rhythm-fold. Of course, the music was heard only in the earphones. 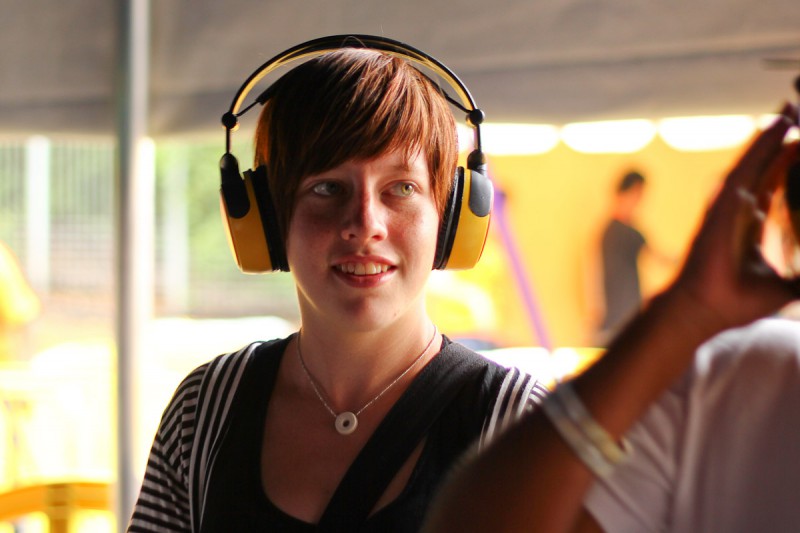 One of the disk jockeys.

People are dancing in silence to different music. 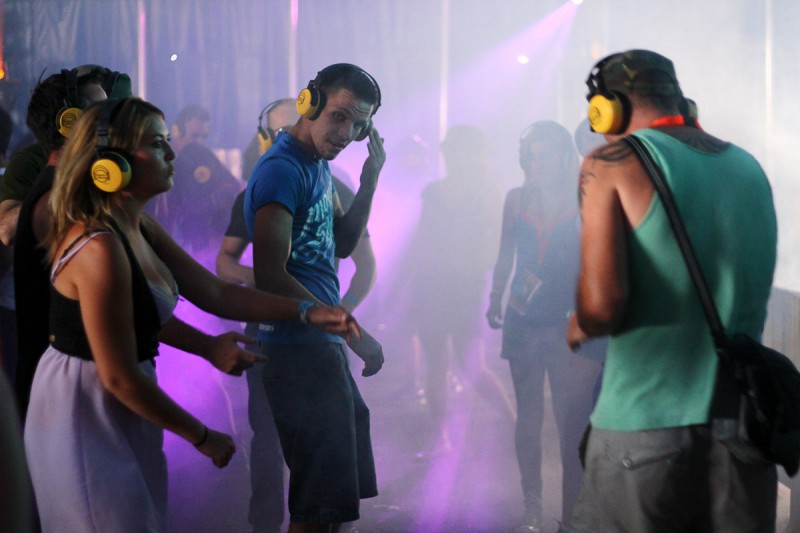 For many people, the “Silent Disco” marquee was the place where they could wait till the rain was over and quietly write an SMS (or as they said there, “text”, or even so: “txt”) to some pleasant music. 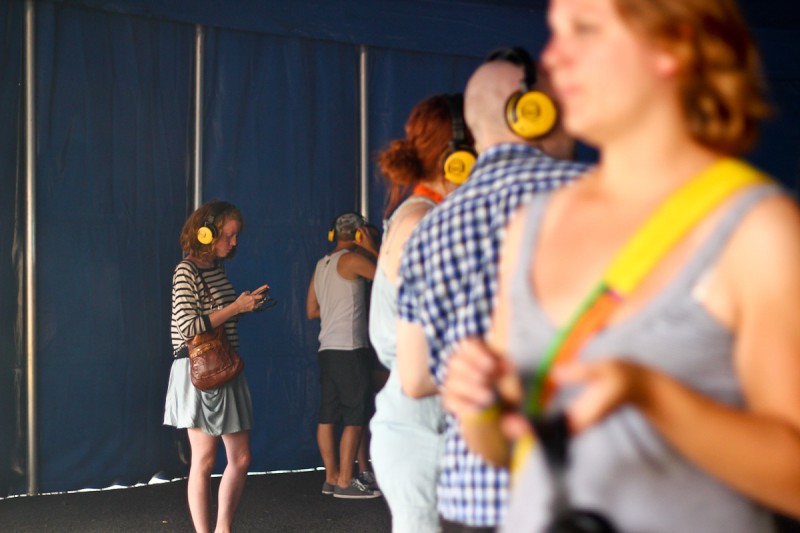 We are approaching the resting zone where it is allowed to buy alcohol. The people are just resting on the grass. It is still prohibited to drink alcohol in that section. 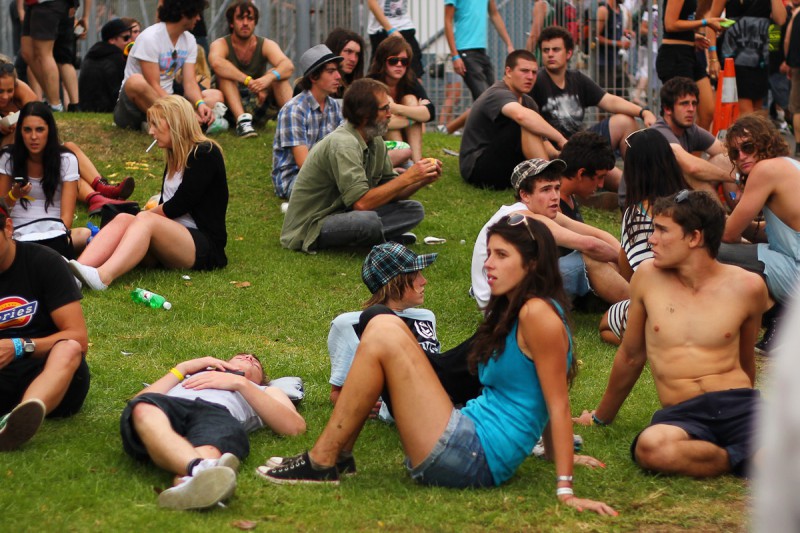 A thoughtful girl is sitting under the tree and waiting for her prince who either is gone to make water or to get water. 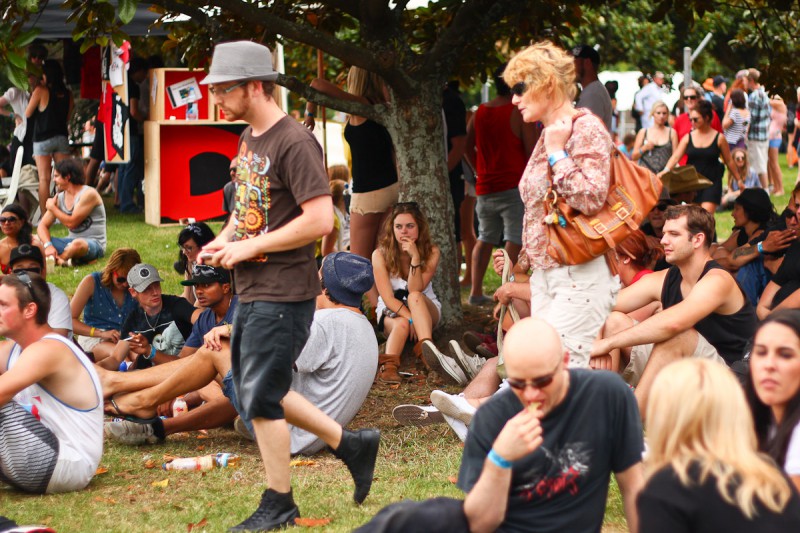 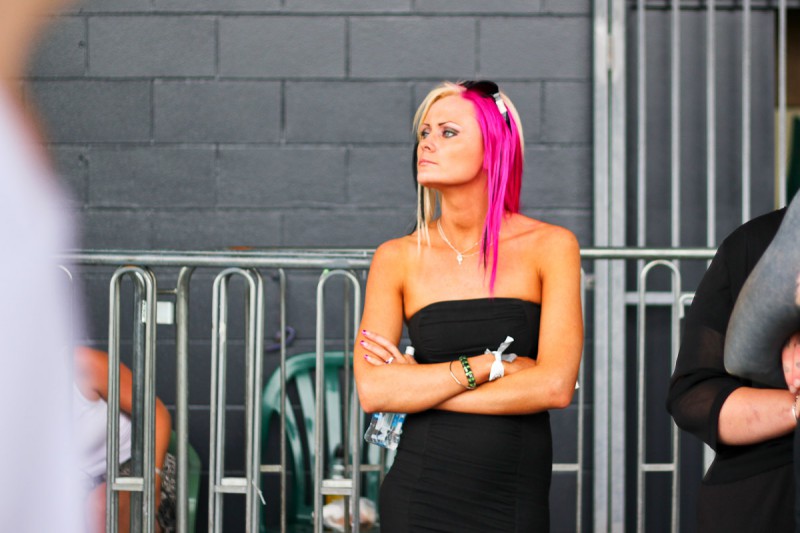 One of the entrances to the stands. We wanted to eat sushi brought with us. 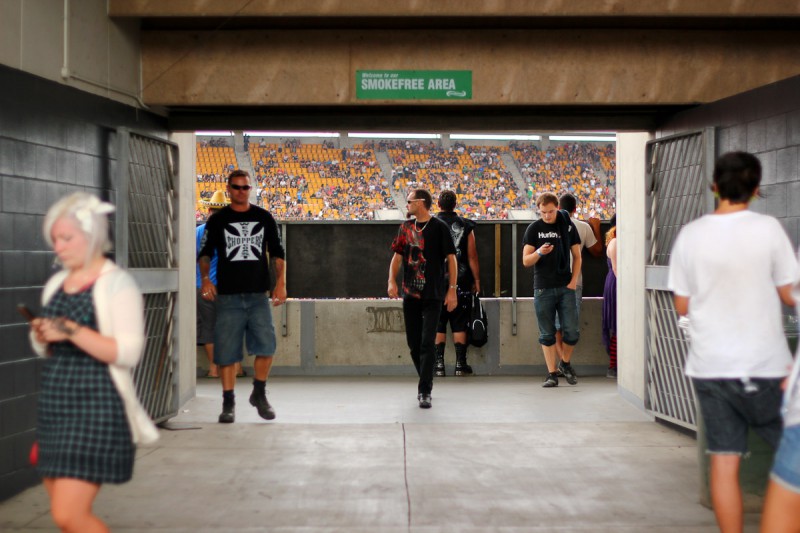 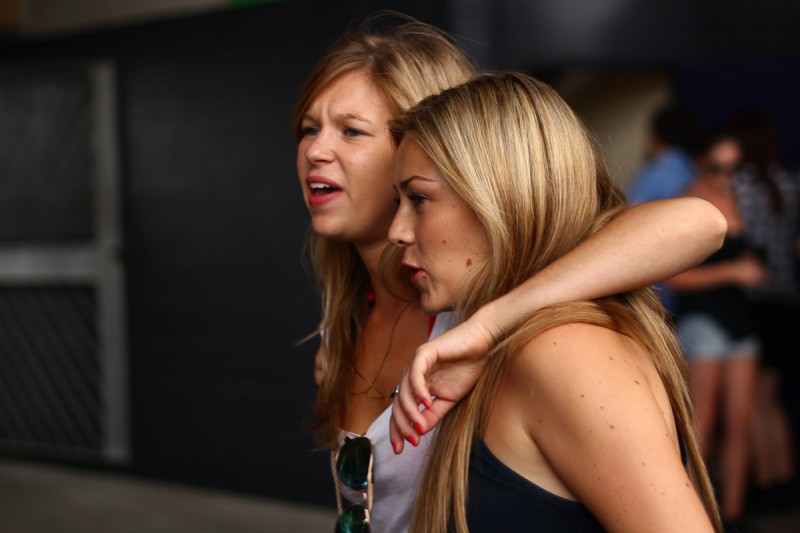 Drinking water was sold in kiosks in bottles but one could get it poured from a usual hose with the inscription “Drinking water”. 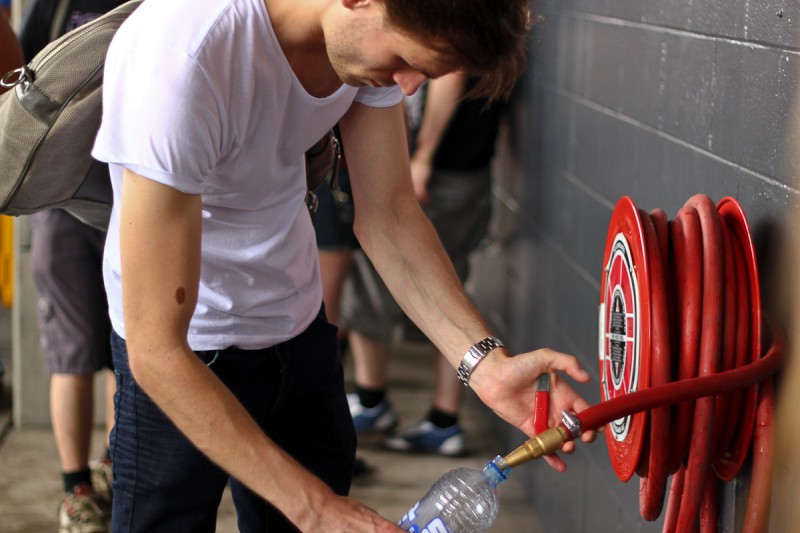 A general view of the stands next to the Blue Stage. 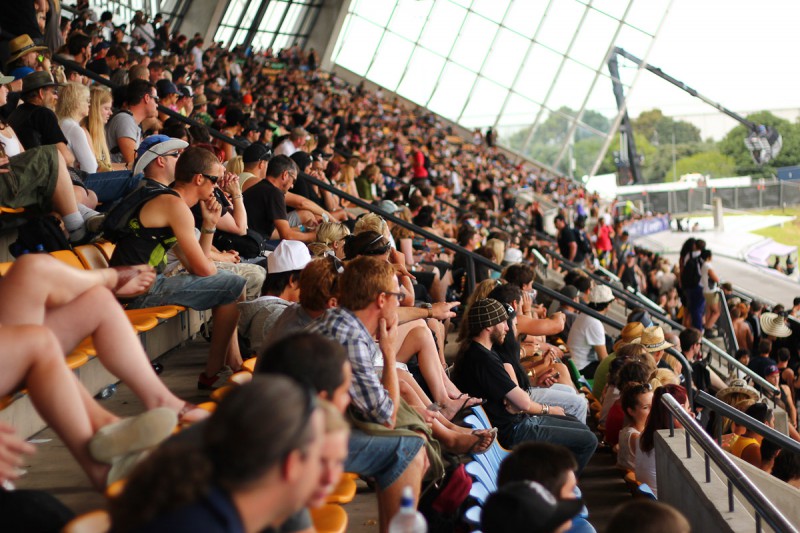 The amusement “Super Ring” was permanently popular till the very end of the festival. Even in the absolute darkness during the Rammstein’s performance there was a long line of people willing to ride it. In the picture you can see carriages with people hanging head-down. 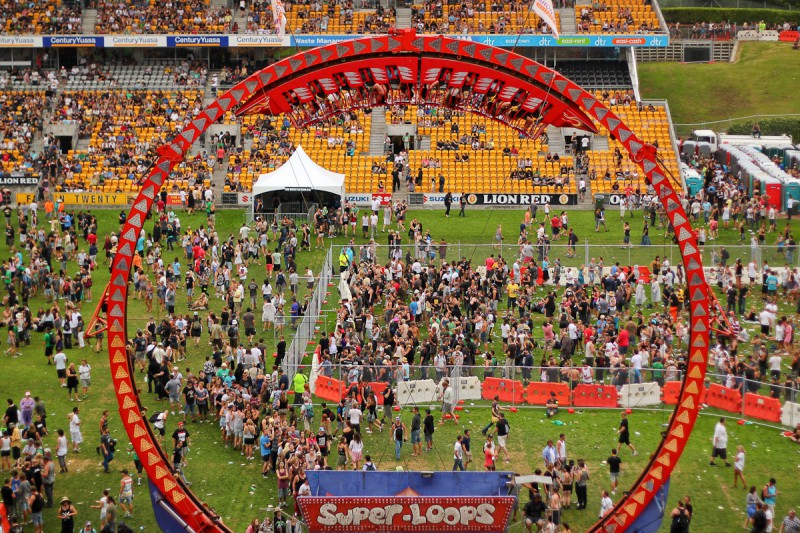 Another amusement is in this photo. The symbol “V” in the background is a local energy drink which tastes better than “Red Bull” but still chemical. There is a line tautened and one can slide down it from the upper part of the stadium the same way as in spy films.  Tire casings seen in the right top corner are to soften the stop. 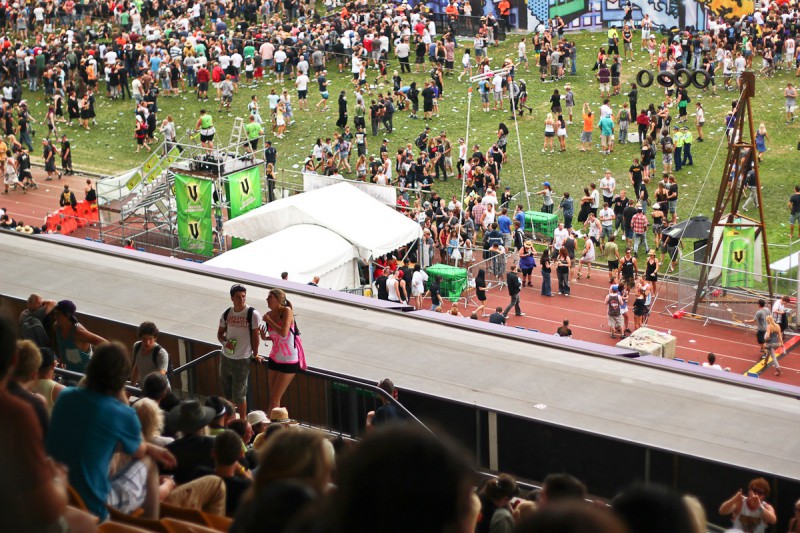 The main stages: Orange Stage and Blue Stage. There is John Butler Trio on the Blue One. 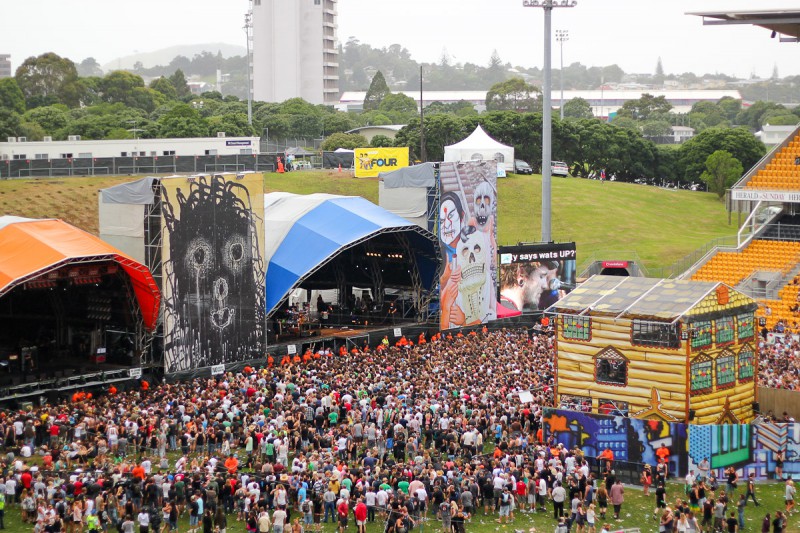 A bald-headed guy in the back row wants to eat our sushi and at the same time as if is willing to say something. 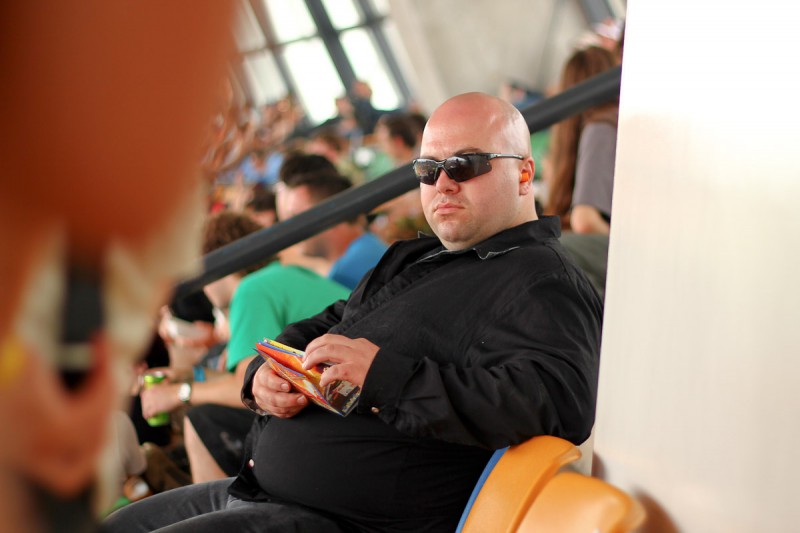 Sweet girls, like puppies in a cardboard box, are on tip-toes to better see what is happening in the field. 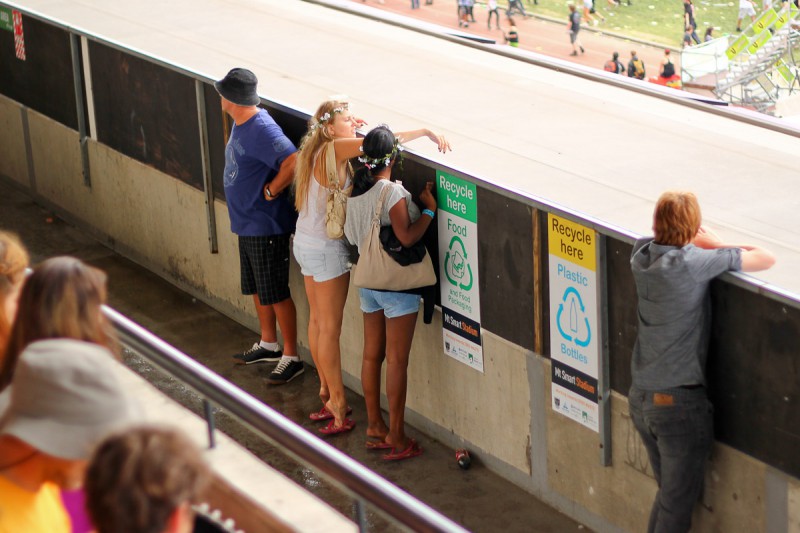 That is the end of the second part of photos from the festival “Big Day Out”. The first part is here.