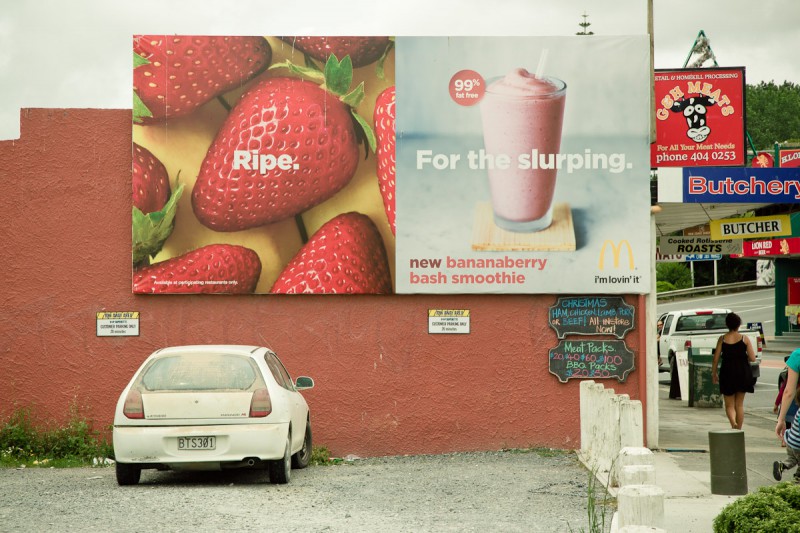 Here in Kawakawa, judging by the vastness of multi-colored foofaraw and trees that grow on roofs, people are quietly going mad. The small (the population is slightly over 1000) roadside town north of North Island is decorated with every color of the rainbow. A long time ago there was a coal mine nearby, but since then the resource has run out, and now people make a living mainly from farming and feeding travelers. There are quite a few authentic New Zealand cafes with pretty good coffee and croissants in the town. Many people stop by to eat, since the settlement is located approximately halfway to Auckland.

Kawakawa is also called “Train Town” since trains occasionally pass by on the road that passes through it. Nowadays tourists are given rides on the eighty-kilometer section of the old railroad. Family/children’s entertainment.

Of course, the most popular site of Kawakawa is the public restroom built by the Austrian architect and painter Friedensreich Hundertwasser, who is famous for his unique style. His canvas buildings are called “ecological,” “organic,” “biomorphic,” “natural.”

Friedensreich left his footprints all over the planet. Other than New Zealand, where the artist spent the last 25 years of his life, his architectural projects can be found in Germany, Austria, Japan, the USA, Switzerland and Israel (photos on Google Images). I’ve heard that many people deliberately fly to New Zealand to look at his final project, which he finished one year before his death: a public restroom in Kawakawa.

This is what the entrance to the restroom looks like. A tree grows through a hole in the roof. (The photos of the restroom aren’t mine, I got them here.) 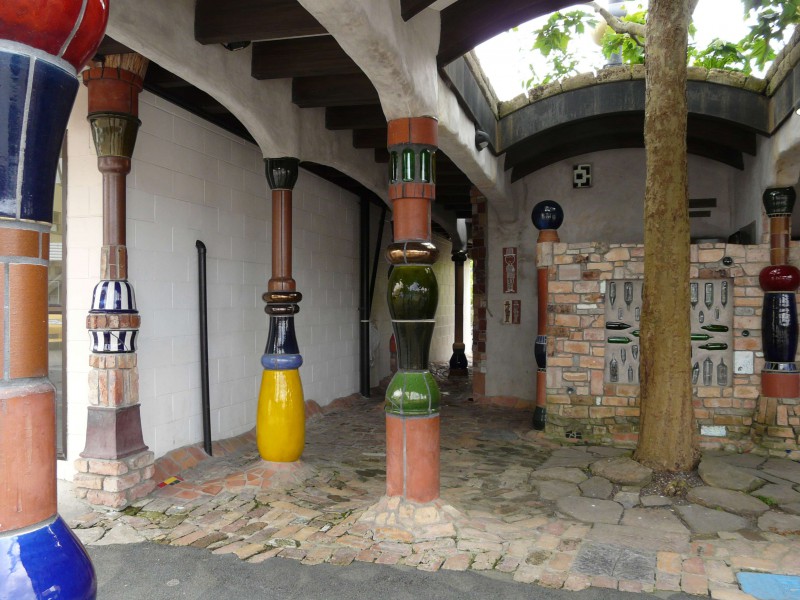 Everything inside is made from ceramic tiles which are laid together using solvent, there are no right angles. It’s as if the floor is moving. 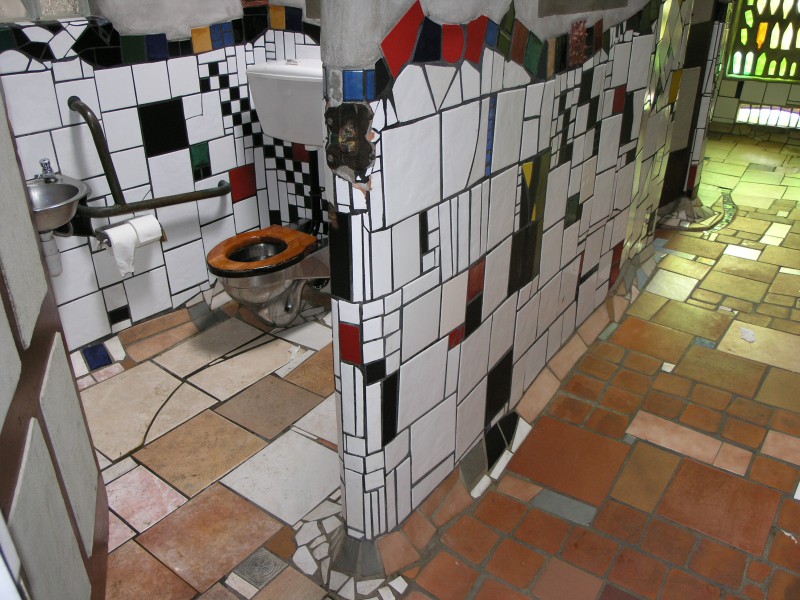 Light gets into the building through a stained-glass window made of empty glass bottles. 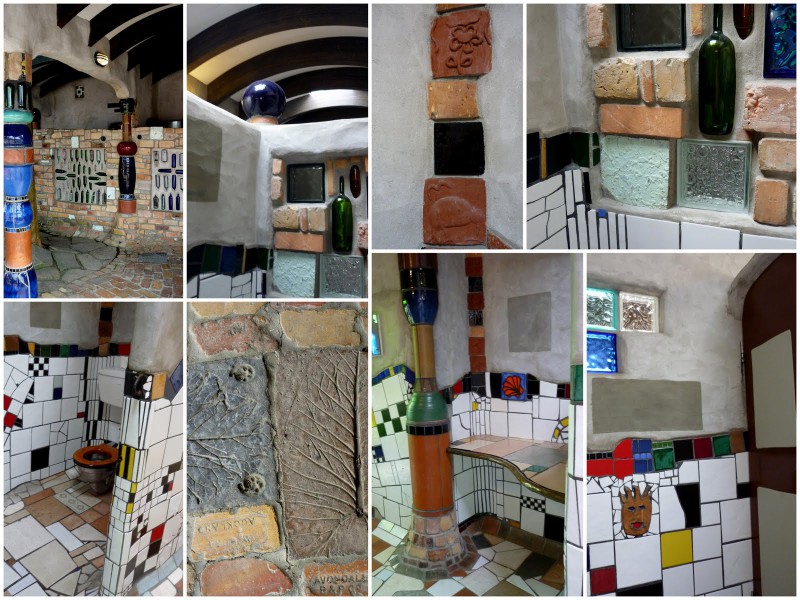 More photos of artistic restrooms can be found on Google Images.

Across from the restrooms there is a museum, the entire wall there is covered with near-Maori drawings. The symbols probably mean something. 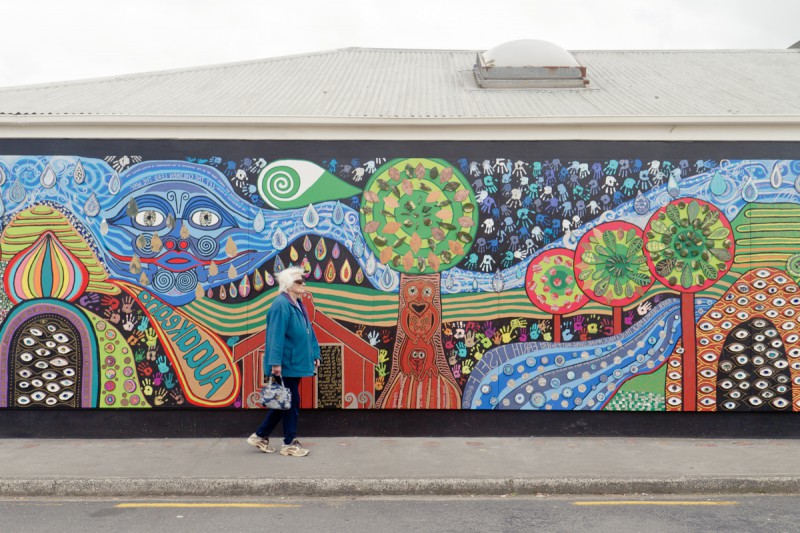 The bus station for “Clark” school buses in the outer part of the city. 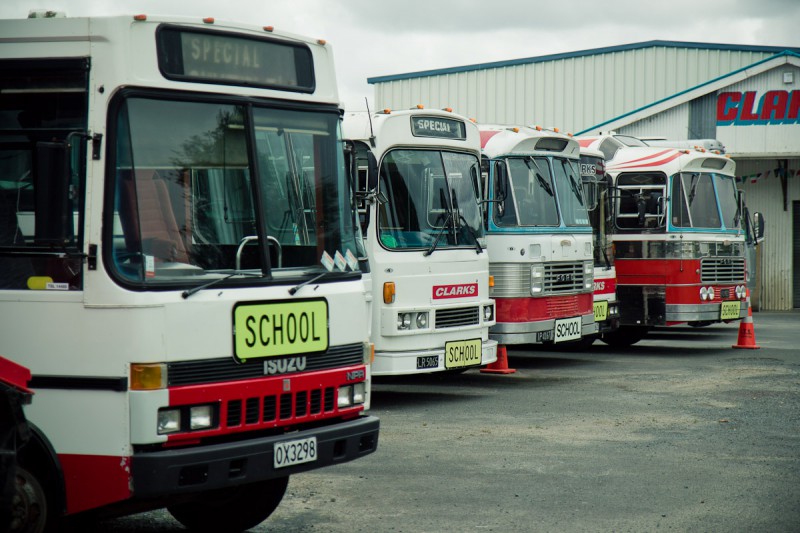 A red sign on a pub where people love the New Zealand beer “Lion Red.” Here people can and like to drink. 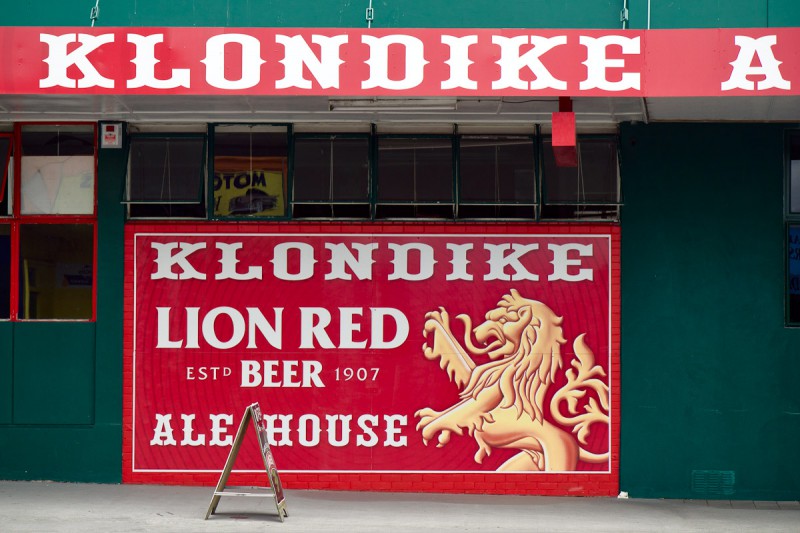 You can see the train which was mentioned in the beginning of the post passing through the city in the background. 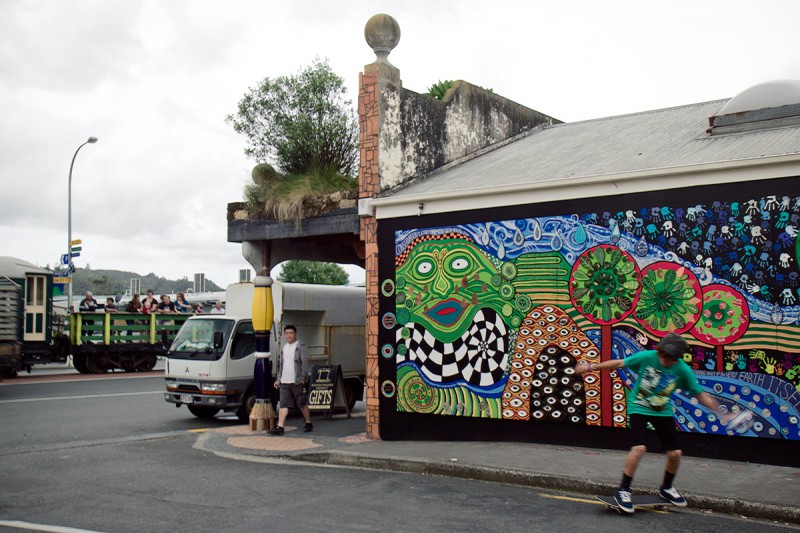 A farmer’s four-wheel off-road truck that is parked in front of a bar with arcade games. 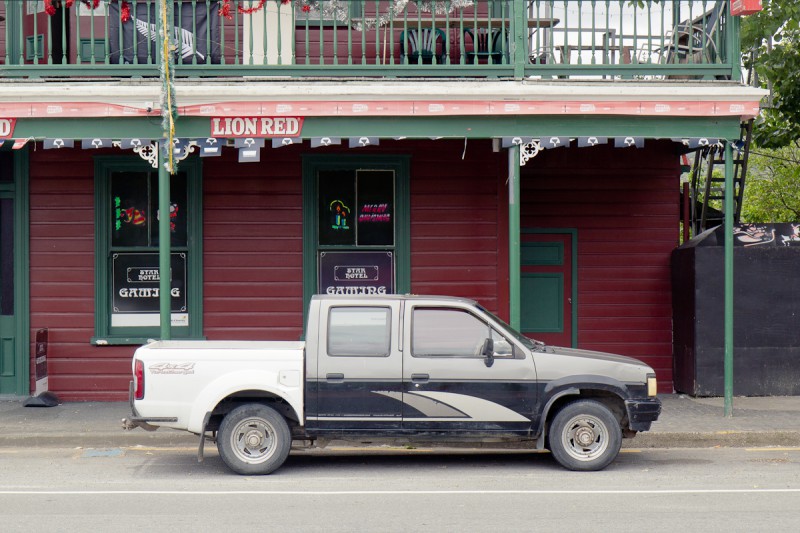 Second-hand goods are sold in the empty first-floor rooms of the provincial theater of the town Kawakawa. Here and there you can encounter a familiar from Napier Art deco style. 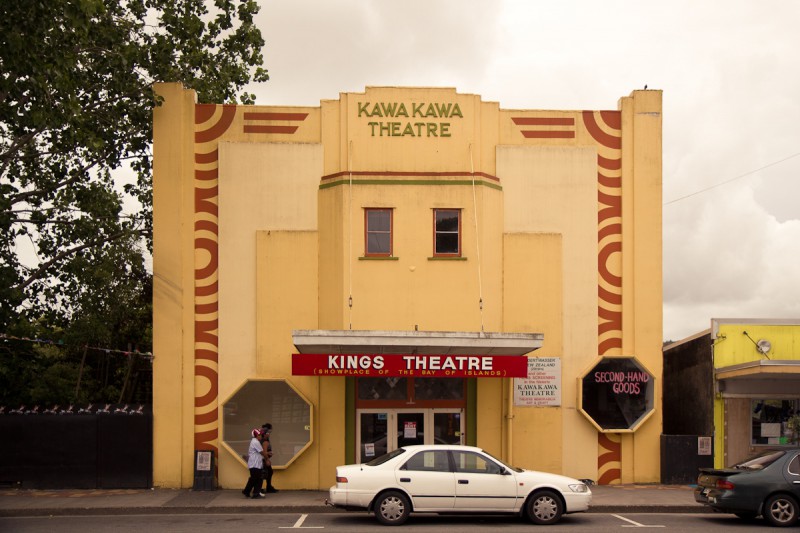 In a Chinese restaurant, a little girl waited for her parent to make fish and chips, the favorite dish in New Zealand. 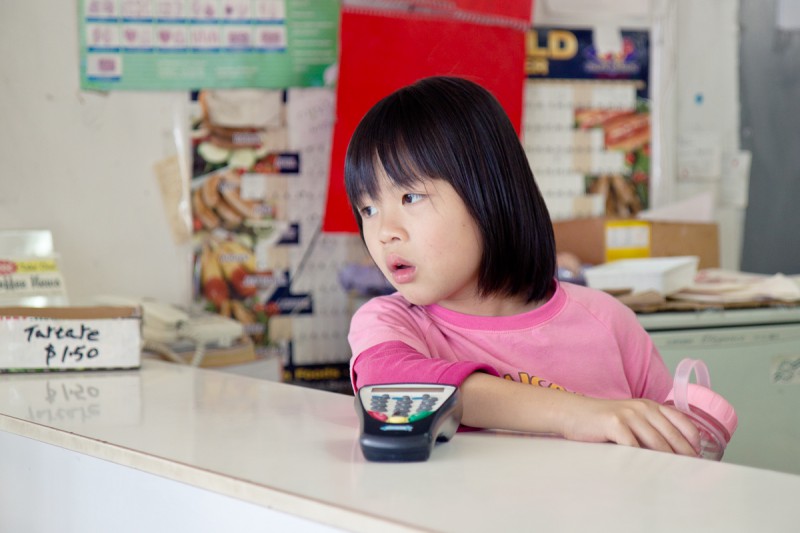 Because of the amount of pedestrians by the Friedensreich Hundertwasser public restrooms, the traffic significantly slows down. 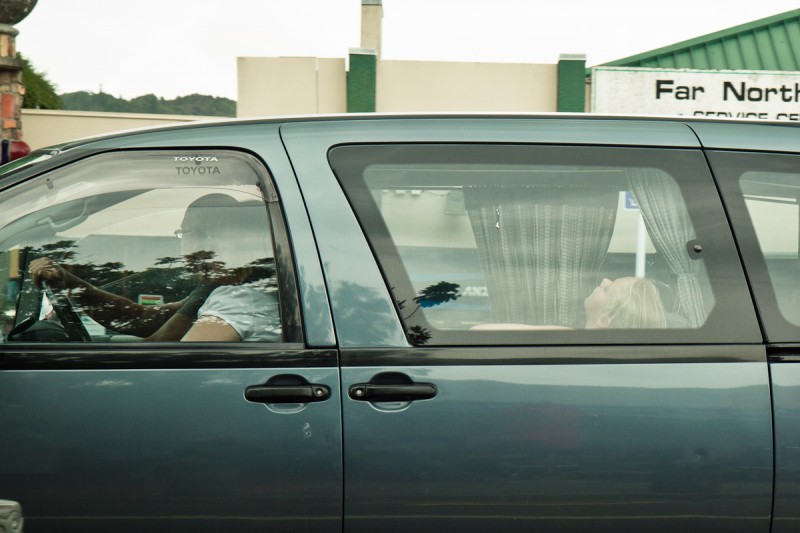 The ceramic shark which many recognize from the illustrations to the recent post about adulthood. The small sculpture park made in the same inimitable “biomorphic” style in the downtown was closed for the holidays. On regular days, I suspect, children would really like it there. 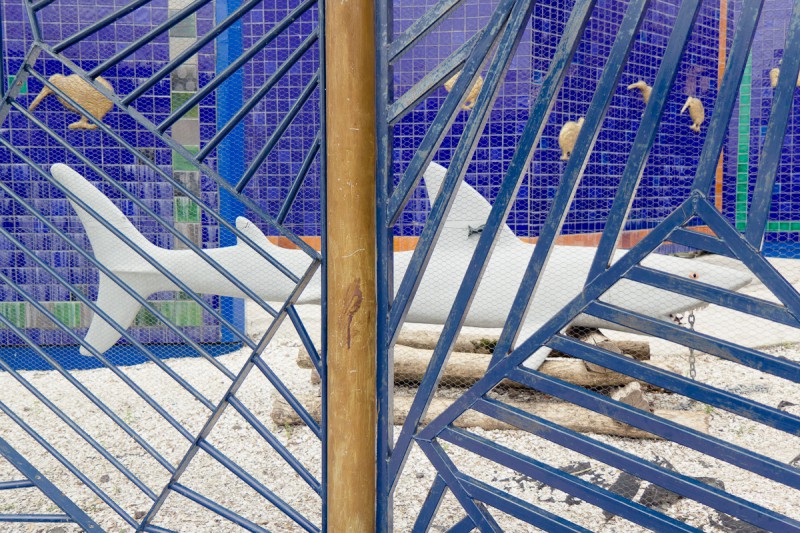 Kawakawa pleased me with its originality, which was unexpectedly encountered among regular New Zealand farming landscapes.